Review the history of the Iron Spider as a new villain takes up the mantle!

Young heroes often look to their older counterparts for inspiration. Sometimes they need help managing a super villain or bearing the weight of responsibility, and sometimes they just need help coming up with a codename.

Taking on an identity previously held by a hero can be an act of honoring what came before—or a convenient shortcut to earning the public’s trust. That, however, usually doesn’t end up being the case with villains—their identities and gear often wind up on the black market, which is how Miles Morales’ uncle Aaron Davis became the new Iron Spider!

Having assumed his new identity, he then gathered Spot, Bombshell, the new Electro, Hobgoblin, and Sandman to form a new Sinister Six in order to harass our hero in SPIDER-MAN, by writer Brian Michael Bendis and artist Oscar Bazaldua.

This Iron Spider sports a different color scheme than the original—black and gold instead of red and gold—and adds to the long journey the mantle has gone on since its full debut in 2006’s AMAZING SPIDER-MAN #529. At that point, Peter Parker had been a member of the Avengers for a while and, as a result, Tony Stark had taken an interest in the kid that he saw as a kindred spirit in the sciences. So, naturally, one technological genius gave another a bleeding edge upgrade in the costume department—and the resulting hero collaboration resulted in the Iron Spider. 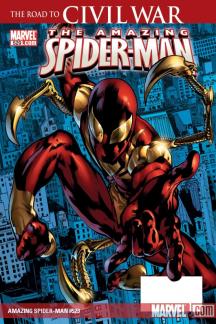 The first version of the suit featured a bullet and heat-resistant surface, built-in scanners, a heads-up display, GPS, a gas-resistant mask, and a mesh webbing that allowed the hero to glide through the air. By AMAZING SPIDER-MAN #530, Stark added even more goodies, like an invisible mode and the ability to look like other existing costumes.

As this story took place during the buildup to Civil War, Peter started to wonder if Tony only gave him the new costume as a means to convince him to support the Super-human Registration Act, though he supported it (and revealed his true identity to the world in the process) nonetheless. But as the world—and its super villains—seized on the innocent lives connected to Peter Parker, and thus Spider-Man, the Wallcrawler’s support for the SRA receded as he saw its potentially disastrous personal ramifications. 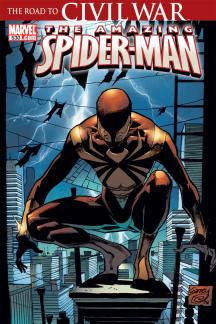 Finally changing his mind on the matter, Parker threw down with Iron Man—and only narrowly escaped the fight when The Punisher stepped in to save him. After joining Captain America’s anti-Registration side, Parker ditched the Iron Spider costume, eventually switching to his classic black costume after Civil War ended with Steve Rogers’ death.

The Iron Spider costume didn’t just gather cobwebs in Parker’s closet, however. It next appeared in AVENGERS: THE INITIATIVE #3 on a trio of heroes referred to as the Scarlet Spiders. Read more about the arachnid triumvirate in THE INITIATIVE #7!

Even Mary Jane Watson got in on the Iron Spider action in last year’s AMAZING SPIDER-MAN #15, by Dan Slott, Christos Gage, and artist Giuseppe Camuncoli with a stunning Alex Ross cover! She pulled it on while Iron Man and Spider-Man took on Regent, eventually attacking the villain herself, giving Spidey enough time to save a prison full of captured innocents and close out the climactic “Power Play” storyline.