The Hulk travels to a Future Imperfect to meet his evil alter ego!

A blast from the past made his hulking presence felt this week as writer Ed Brisson and artist Mike Deodato launched their first issue of OLD MAN LOGAN. Ever since we first glimpsed the Deodato-drawn cover with Maestro, a future version of Hulk, throwing down with the elder incarnation of Wolverine, we’ve been waiting to see what happened and now it’s finally here! In true Flashback Friday tradition, though, it’s time to hit the rewind button and head back to 1992’s INCREDIBLE HULK: FUTURE IMPERFECT two-issue prestige format series by Peter David and George Perez.

The series kicked off by dropping us into Dystopia, a city about a century in the future in the middle of a wasteland run by the feared Maestro. Janis, however, wanted to put a stop to that, so she and her band of rebels stole Doctor Doom’s time machine and recruited a little help in the form of The Incredible Hulk! At that point, the Jade Giant spent his time running around with Bruce Banner’s intelligence and Hulk’s bulk.

After tangling with some of Maestro’s goons, Hulk met a very old Rick Jones who kept a museum celebrating all of the dead heroes. The former sidekick soon explained that a war had devastated the planet, killing many of the heroes in the process and paving the way for Maestro’s rule. All the radiation and death swirling around after the major conflict drove Hulk a bit crazy, eventually turning him into Maestro. He built some dampeners that allowed people to survive in Dystopia and then basically just used humanity to entertain himself. 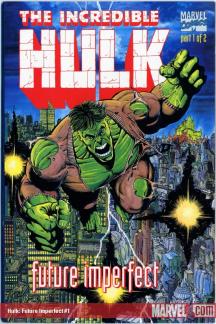 That didn’t sit well with the younger Banner. Maestro won the first battle between the titans, breaking his counterpart from the past’s neck in the process, but keeping him alive to wage further mental warfare. That all played nicely into the plan crafter by Hulk, Janis, and her people which involved tunneling into Maestro’s stronghold and getting the drop on him. The two Hulks tussled once again, this time in Jones museum, so artifacts like Captain America’s shield and Wolverine’s skeleton came into play.

Ultimately, Hulk used his smarts to lure Maestro back towards the time machine, which he used to send the tyrant back to that fateful day when Bruce Banner ran out to save Rick Jones from an exploding gamma bomb. This time, Maestro stood right next to the bomb as it exploded, seemingly killing him in the process.

Of course, we know that’s not how it works in comics! Maestro first returned in the pages of 1998’s INCREDIBLE HULK #460 by David and Adam Kubert. As Bruce mentally dealt with various important people in his head, Maestro appeared to tell him that his corpse acted as a kind of beacon that kept bringing Banner back to the original bombing location. Each time, Maestro absorbed a bit more of that all-important radiation which helped him return at the end of the issue. In the following chapter, the villain sent his consciousness into a Destroyer that he used to fight Hulk. Ultimately, Bruce used his mind to battle Maestro for control of the Asgardian artifact, which lead to a victory for the good guy!