Get further insight into this version of Wolverine with his classic debut tale!

With the end of the OLD MAN LOGAN story “Return to the Wasteland” hitting this week, it seems like just the right time to do the same ourselves and look at his first appearance!

This alternate future version of the character first debuted in 2008’s WOLVERINE #66 thanks to Mark Millar and Steve McNiven. That issue showed a take of the ol’ Canucklehead who had survived the villains’ attempt to take out the heroes and divide up the country. He’d even settled down with a woman named Maureen and they’d had a pair of kids: Scotty and Jade.

Logan had become so focused on keeping his family safe that he refused to pop his claws and take out members of the Hulk gang when they came to collect the rent he didn’t have. Instead, he took a beating in front of his kin and found their very survival threatened if he didn’t come up with the money by the next month.

As he healed, another survivor paid Logan a visit: Clint Barton. The now-blind archer proposed a delivery job to raise some capital, in which the former X-Man would help get the one-time Avenger to the east coast in two weeks. Logan agreed and the two took off in the old Spider-Mobile with Hawkeye at the wheel!

The rest of the story ran until issue #72 and concluded in the WOLVERINE: OLD MAN LOGAN GIANT-SIZE one-shot; along the way the heroic duo ran into Ghost Riders, killer Moloids, Venom-covered dinosaurs, and the massive skeleton of Hank Pym.

Of course, this being Wolverine, plenty of skeletons still rattled in the old closet. Eventually he told Hawkeye why he never wanted to pop his claws again. Back during the villain uprising, Mysterio tricked him into killing all of the X-Men. To punish himself, he put his head on the tracks where he waited until a train smashed into him. 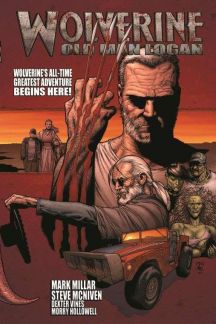 Upon arriving in New Babylon, the pair soon learned that the samples of Super Soldier Serum they’d carried all across the country weren’t meant to start a new hero team, but to be given to The Red Skull—the President of the United States!

Hawkeye’s fake contacts blasted both of them, but Logan got better and dealt with President Skull by cutting his head off with Captain America’s shield before blasting off for home in part of an Iron Man armor with a briefcase full of money. Unfortunately, the Hulk gang got bored, came for the rent early and killed Logan’s family in the meantime. Enraged, Logan rechristened himself Wolverine and exacted bloody revenge on his family’s killers before moving on to the head honcho himself: Bruce Banner.

Old Man Logan came back to the forefront as Secret Wars reintroduced a variety of alternate reality characters to readers before integrating a lot of them into the main Marvel Universe. Brian Michael Bendis and Andrea Sorrentino handled that five issue story which saw Logan clawing his way from one part of Battleworld to another before eventually landing naked in the Marvel U’s Times Square. The ongoing adventures have been handled by Jeff Lemire and Sorrentino, with Lemire also bringing Logan into the fold of EXTRAORDINARY X-MEN. With our version of Wolverine still in the dirt, this one helps fill the void while he also travels the world trying to ensure his world never comes about.