Look back at the first appearance of Symkaria's most famous citizen.

With the recent Silver Sable news, it seems like the perfect time to look back at her 1985 debut in AMAZING SPIDER-MAN #265. In that issue from Tom DeFalco and Ron Frenz, readers first saw a mysterious group chasing after the renowned thief known as the Black Fox. After the police failed to bring him in, purple and orange-clad representatives from Silver Sable International give chase. 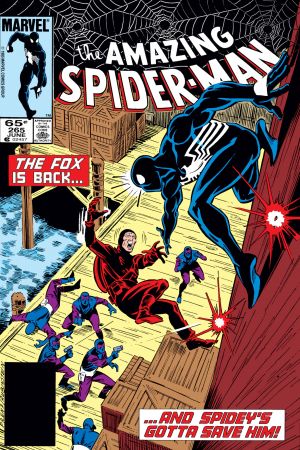 After visiting Harry Osborn, his wife Liz and their new baby Norman in the hospital, Peter Parker put on his Spider-Man togs and started his web slinging thing which soon intersected with the the Wild Pack’s Fox hunt.

Fox had just given up the chase when Spidey jumped into the fray with Sable’s employees giving the Fox time to escape. After the fracas, an irate cop informed the Wall Crawler that he just took out Symkarian officials working with the city to take down the thief.

After that, readers finally got their first glimpse of Silver Sable at the Symkarian embassy. The mercenary first explained the financial benefits for nabbing the Fox and then taking on her own men as a training exercise before easily squashing an assassination attempt on her life.

Spidey – now wearing a sewn version of his black costume provided by Black Cat – caught back up with the Black Fox and helped save him from Sable’s people. He only briefly encountered the big boss, but it would be the first of many as Sable would show up in Spider-Man comics for years.

In 1992, the woman known as Silver Sablinova scored her own series called SILVER SABLE AND THE WILD PACK. The book, by Gregory Wright and regular artist Steven Butler, not only further established the star as part of the larger Marvel Universe, but also brought her into contact with a variety of well-known characters like Captain America, Punisher, Luke Cage and Venom. She also spent a great deal of time with Sandman who joined the Wild Pack for the first time during an adventure in AMAZING SPIDER-MAN #279–281. 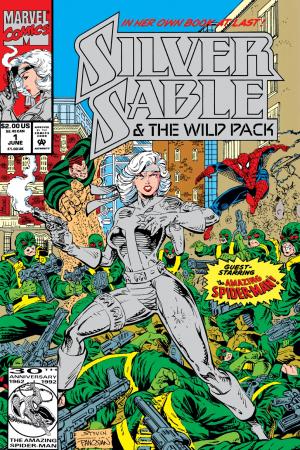