Leader and Hulk continue the longstanding argument about the superiority of intellect & strength!

Great villains often show the darker potential of the heroes they face off against on a regular basis. In the case of The Leader – who reappeared in this week’s SHE-HULK #159 – he represented the brain side while Hulk clearly leaned towards brawn.

With his return, it’s a great time to look back at this character created by Stan Lee and Steve Ditko and his rise to power starting in 1964! The man simply known as The Leader debuted in TALES TO ASTONISH #62 as a masked figure sending The Chameleon to the base that Bruce Banner worked at to steal his military secrets. 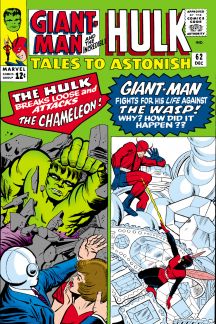 In the following issue, we learned not only that this man sported an enlarged head but also green skin! He also very helpfully revealed his origin! A simple laborer at a chemical research plant happened to pass a Gamma Ray Cylinder as it exploded. Though seemingly unhurt at first, the man gained an intense thirst for knowledge and an uncanny ability to retain what he read. More shockingly, though, he eventually developed a larger cranium and his skin turned an emerald color!

At first, The Leader didn’t even know about the Hulk, but wanted Banner’s secrets. However, when he sent a Humanoid to do his bidding, the Hulk popped up to defeat it. During this time, Banner did his best to keep his double life as the Hulk a secret from his boss, General Thunderbolt Ross.

Enthralled by the appearance of a fellow green-skinned human with abilities far beyond mortal men, The Leader intended to partner up with the Hulk at first, or else destroy him!

Though The Leader would attempt to use even more Humanoids to steal the secrets and grab the Hulk, he didn’t take into account the fact that Hulk would turn into Banner if he got too agitated. After that happened without the Leader seeing, Banner made a break for it, turned back into the Hulk and wound up swimming far out into the ocean where a Russian sub picked him up.

The Leader worked with the Russians at that time, but decided to sit back and wait until Banner and Hulk broke back through the Iron Curtain. That happened in TALES TO ASTONISH #68 – now drawn by Jack Kirby – wherein Leader attempted to steal Banner’s Absorbatron with the help of cell-sized Humanoids that could grow to much larger sizes. 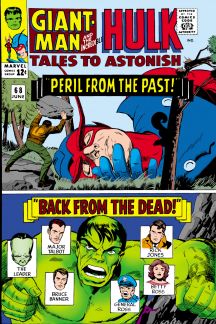 The two gamma-powered individuals finally met face-to-face in #69 when the Humanoids brought a knocked-out Hulk to the Leader’s lab. Upon finally waking up, the Hulk destroyed Leader’s lab. Not long after, Hulk seemed to actually consider the Leader’s offer of partnering up and they did after a fashion as Leader sent Hulk to get the Ultimate Machine from the Watcher. The Jade Giant succeeded, but the immense amount of galactic knowledge absorbed by The Leader seemed to kill him! 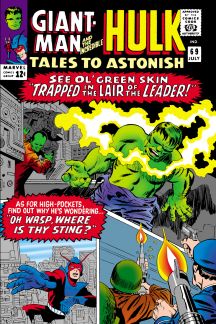 Of course, good villains never stay dead and the big brain returned to hassle Hulk and other heroes on more than one occasion. Considered one of Hulk’s main villains, Leader – now also known as Samuel Sterns – made the jump to other media ranging from cartoons and video games to the big screen!

Curious about how The Leader recovered from his apparent brain drain? Well, readers found out for themselves in the pages of INCREDIBLE HULK #115. In that issue by Stan Lee and Herb Trimpe, Leader said that he’d taken precautions before using the Ultimate Machine. He’d set it up so that, if his heart stopped beating, a specially-designed Humanoid would use a Revivor Beam to bring him back! He then spent his time planning his revenge on his nemesis!