Travel the timestream to learn the true story of the master villain!

Since the early days of Earth’s Mightiest Heroes, Kang the Conqueror has agitated the Avengers and then some with his mastery of multiple eras and desire to add the Marvel Universe to his empire. On November 14, the time tyrant takes on a new role as central antagonist in the “LEGO Marvel Super Heroes 2,” creating a campaign that crisscrosses all reality and space.

Before you play the game, discover the story behind this agent of chronological chaos with the History of Kang!

Though shrouded in mystery, the origins of the time-despot known as Kang may be pieced together not only from records of his clashes with Earth’s many champions, but also his own words. Once assembled, a picture of the so-called “Conqueror” stands out in stark relief, an ongoing saga of ambition, greed, and tyranny.

A man named Nathaniel Richards, who claimed to be a scholar born in the year 3000, utilized a time-travel device created by Victor Von Doom, a supposed ancestor of his, to flee a future world that may or may not come to pass. Setting the device to whisk him away to a time nearly 6000 years before his own, Richards arrived in the land and era of the pharaohs of Earth’s ancient Egypt and fashioned a dynasty for himself. As Rama-Tut, he held the people of the region in thrall while he attempted to subjugate the mutant En Sabah Nur to do his twisted bidding.

Rama-Tut’s rule stretched on through the years until the time-traveling Fantastic Four landed in his kingdom from the future and challenged his authority. The faux-pharaoh made the famous heroes his slaves, but their ingenuity and will to be free broke the despot’s grip on them and he fled into an alternate dimension, leaving only vague evidence of his reign as Rama-Tut behind. The Fantastic Four returned to their own time, unsure of exactly who they fought or if they’d ever clash with him again.

Richards traveled through space and time, licking his wounds and plotting his revenge. During this period he came across none other then Doctor Doom, lost just outside the orbit of the planet Jupiter around the sun. Together, the two villains suggested they might possibly be the same person, not merely related, and made a pact to not endanger each other by battling the Fantastic Four as a single unit. The future-Kang then returned Doom to Earth and continued on his way. 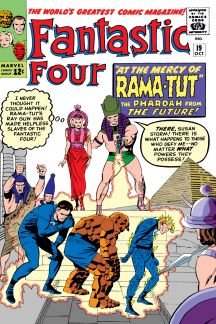 An accident involving the energy that powered his ship sent Richards hurtling farther into the future then he intended, where he discovered warring armies on Earth and the opportunity to refashion himself as The Scarlet Centurion. Under the cloak of a supposed chronal imbalance in the timestream, the tyrant forced the Avengers to fight an earlier version of the team from an alternate timeline, but lost to Earth’s Mightiest Heroes in the end.

Unhappy with his unsuccessful forays into time and smarting from battle with those who opposed his advances, Richards concentrated on an ultimate persona to operate under, and thus Kang the Conqueror rose up to dominance over all. For his first, real campaign as Kang, he turned his attention back to the Avengers at a time when their limited experience as a well-honed fighting unit might serve him well…