The Black Panther joined forces with Storm of the X-Men in BLACK PANTHER #26 to search for a missing Lemurian child while his former protégé Vibraxas made his return to Wakanda. In BLACK PANTHER #27, full-blown hostilities broke out between the small African nation and Lemuria, prompting T’Challa to open negotiations with both Doctor Doom and Namor the Sub-Mariner.

Juggling dealings with Doom, Namor, and Magneto in BLACK PANTHER #28, the Panther confronted an attempt by his long-time enemy Klaw to disrupt the fragile peace. T’Challa’s friend Everett Ross secured a more solid truce in BLACK PANTHER #29, while the Panther battled Klaw and once defeating him traveled to New York City with Namor. 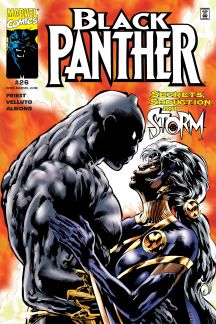 Beyond all this, a resurrected Erik Killmonger captured Everett Ross in BLACK PANTHER #36, and T’Challa’s daughter teamed with the White Wolf for an adventure.