T’Challa joins the Illuminati in an attempt to protect the multiverse!

After attending a party to welcome Janet Van Dyne back from exile in the Microverse in AVENGERS #34, The Black Panther discovered something incredible in NEW AVENGERS #1: the incursion of an entire universe upon his own, and a woman named Black Swan who seemed to be facilitating the event.

In NEW AVENGERS #2, T’Challa played host to members of the so-called “Illuminati,” high-profile heroes self-tasked to protect their world. He relayed his findings of the incursions to them, and they in turn suggested gathering the Infinity Stones to stop their progress. Despite his desire to kill Namor, a member of the Illuminati and responsible for past destruction in Wakanda, the Panther joined with his fellows to hunt for the Stones in NEW AVENGERS #3. Once assembled into the Infinity Gauntlet, Captain America used them to halt an incursion, and in doing so, shattered the Stones.

T’Challa and the others decided to seek more Infinity Stones in alternate universes in NEW AVENGERS #4, but ran afoul of a variant Galactus and his herald, Terrax. The Black Panther disagreed mightily with his companions in NEW AVENGERS #5 over their willingness to work with Black Swan, a decision that led them to Latveria to stop another incursion. 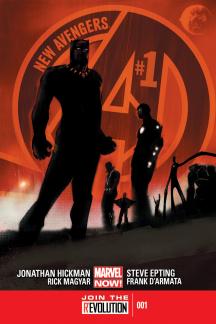 Strange blue skies met the Illuminati in NEW AVENGERS #6, and T’Challa mourned the loss of the man he used to be as he himself pulled the trigger on the death of another universe. Back in Wakanda, Namor asked for peace between his Atlantis and the African nation in NEW AVENGERS #7, and T’Challa sought advice from his friend Reed Richards before his sister Shuri officially refused Namor’s entreaty and declared war.

In NEW AVENGERS #8, Wakanda attacked Atlantis, a preamble to the mad space tyrant Thanos’ invasion of Earth to find his lost son. While the main team of Avengers made plans to travel into outer space to stop an alien invasion in INFINITY #1, Black Panther helped his people fight off the Black Order’s invasion of his beloved country in NEW AVENGERS #9.

The Inhumans’ king, Black Bolt, summoned the Panther and the Illuminati to Attilan in INFINITY #2 to inform them of Thanos’ purpose on Earth. The heroes left to seek that individual in NEW AVENGERS #10, which put T’Challa on his trail at the Caalsberg Ridge. The quest continued in INFINITY #3, while Black Bolt tried to stop Thanos by himself.

The Black Order returned to Wakanda in NEW AVENGERS #11, while the Illuminati met the Builders, an ancient race of aliens with designs on Earth. The Black Panther witnessed Wakanda in flames in INFINITY #5, a result of the Black Order’s attack, and joined with the Illuminati to defend Necropolis and its cache of incursion-stopping bombs from Thanos’ lust for power.