Iron Man enters the picture as an old foe puts his master plan into effect!

The Krill, strange little creatures, attacked The Hulk in INCREDIBLE HULK #63 in an effort to secure a blood sample for their masters at Home Base, a secret government agency. While Doc Samson, Nadia Blonsky, Sandra Verdugo, and Betty Ross continued to battle the Krill in INCREDIBLE HULK #64, the Jade Giant followed one when it returned to its headquarters.

Later, a nuclear explosion decimated Home Base in INCREDIBLE HULK #65, seemingly killing Sandra and her young son Ricky in the blast. Disturbed by the event, Bruce Banner turned to Nadia for consolation in INCREDIBLE HULK #66, while Betty decided to reveal to Samson that she suffered from cancer.

Home Base unleashed a clone of Banner in INCREDIBLE HULK #67, one which possessed the ability to transform into a twisted version of The Hulk. Banner and Samson debated using the scientist’s blood in an attempt to cure Betty in INCREDIBLE HULK #68, but the question became moot when a battle between the two green behemoths seemed a certainty. That battle to the death occurred in INCREDIBLE HULK #69. 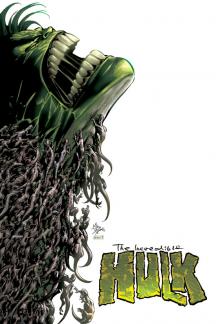 After an odd, clairvoyant man failed in a plan to get The Hulk to kill him in INCREDIBLE HULK #70, Bruce Banner approached his old friend Tony Stark in INCREDIBLE HULK #71. Stark offered him a place to stay, although he’d become embroiled in a scandal over one of his employees who’d committed suicide.

INCREDIBLE HULK #75 unveiled The Leader as Home Base’s secret commander, as well as the mastermind’s offer of a time machine to Banner and the chance for the scientists to wipe away his irradiated past. Iron Man and Doc Samson moved in to confront a Leader-controlled Hulk in INCREDIBLE HULK #76, but Nadia Blonsky lost her life in the ensuing confusion.

Weird stuff just kind of finds you when you’re a Hulk.