The Thing drops by for a scrap and the saga of Planet Hulk begins!

The world’s premiere super hero family received a call for help in FANTASTIC FOUR #533, one that informed them of the Hulk’s latest rampage, this time outside of Las Vegas. The Thing and the Human Torch confronted the jade giant in FANTASTIC FOUR #534, and learned that The Hulk suffered from a direct gamma ray blast, which dredged up bad memories from his past.

The Hulk and Thing traded crushing blows in FANTASTIC FOUR #535, until Ben Grimm literally knocked some sense into the behemoth and the army then spirited him away on a helicopter. Later, in INCREDIBLE HULK #88, a S.H.I.E.L.D. agent approached the Hulk in Alaska with a message from none other than Nick Fury. 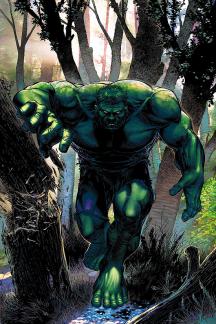 Locked in a ship able to rocket through interstellar space, thanks to the combined efforts of Fury, Reed Richards, Tony Stark, and other, Hulk crash-landed on the far-off planet of Sakaar in INCREDIBLE HULK #92. There, he became a gladiator in the Red King’s arena, and forged a force from among the fighters in INCREDIBLE HULK #93.