Stranded on the planet Sakaar by Earth’s heroes, The Hulk battled the alien menace of the Spikes in INCREDIBLE HULK #100, and then enlisted the aid of the strange Shadow Elders in his war against the Red King. In INCREDIBLE HULK #101 the green giant stole the Elders’ spaceship and rescued an ally. 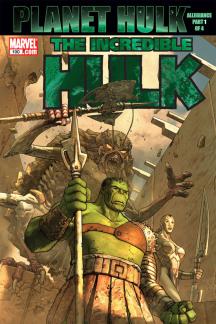 When the jade giant’s original Erath vessel unexpectedly exploded and killed millions of citizens along with his queen, he swore revenge in INCREDIBLE HULK #105. Gathering together a select cadre of his best warriors, Hulk left a devastated Sakaar for Earth in the Elders’ spaceship in INCREDIBLE HULK #106. Approaching his home planet, he relived past fights with the heroes who had banished him in WORLD WAR HULK: PROLOGUE #1.

In WORLD WAR HULK #1, the Hulk easily conquered the first of his tormentors, Black Bolt of the Inhumans, and moved on to confront Iron Man. When Tony Stark heard the Hulk’s intentions, he donned his Hulkbuster armor and flew off to face the emerald behemoth in IRON MAN #19. After fighting Hercules in INCREDIBLE HULK #107, Hulk finally clashed with the Armored Avenger, handily beating him. 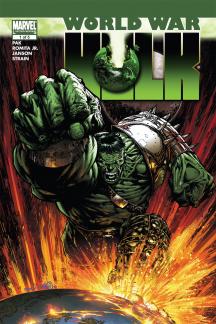 Next, Hulk and his Warbound fought She-Hulk in WORLD WAR HULK #2 before moving on to take care of Reed Richards. With Tony Stark subdued in IRON MAN #20, the green warrior demanded the head of Nick Fury, and then reflected on his past friendship with Rick Jones and his compact with the Warbound in INCREDIBLE HULK #108.

General “Thunderbolt” Ross, his men, and Doctor Strange attacked The Hulk in WORLD WAR HULK #3 as brainiac Amadeus Cho and his Renegades threw in with the Warbound in INCREDIBLE HULK #109. Later, Cho left to confront Hulk in a gigantic arena the jade giant had established in Manhattan. There, in INCREDIBLE HULK #110, he set out to prove that Hulk never killed anyone and should spare the heroes’ lives.

From his throne in the arena, Hulk passed judgment on his tormentors in WORLD WAR HULK #4, while Wong and the Renegades dealt with a being of immense power freed after Doctor Strange’s defeat in INCREDIBLE HULK #111.