Meet the Red Hulk—and nothing will ever be the same!

With his revenge on Earth’s heroes for shooting him into space crumbling around him, Hulk faced off against the most powerful man on the planet, The Sentry, in WORLD WAR HULK #5. After the battle, he began leaking radiation, forcing Tony Stark to bombard the green menace from space satellites, which triggered the Hulk’s transformation back to Bruce Banner.

Not long after, the Hulk’s old foe The Abomination turned up dead in HULK #1, so General “Thunderbolt” Ross and Doc Samson opened up a murder investigation. Banner, in S.H.I.E.L.D. custody after the Hulk’s bid for world domination, knew nothing about it.

A mysterious crimson-hued Red Hulk appeared in HULK #2 and attacked a S.H.I.E.L.D. helicarrier. Elsewhere, the Hulk’s longtime friend Rick Jones changed into a blue-skinned being called A-Bomb and sought out Red Hulk for a fight in HULK #3. When Rick failed to stop the new menace, Banner transformed into the original Hulk and escaped from incarceration. 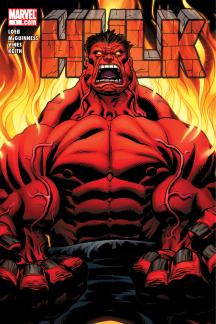 One of the cosmic voyeurs known as the Watchers appeared on Earth to witness the titanic throw down between Hulk and Red Hulk in HULK #4. When that failed to stop the new behemoth, the mighty Thor tried his hand at hammering him in HULK #5, with Iron Man, She-Hulk, Ares, The Human Torch, The Thing, and Namor waiting in the wings for their turn.

Hulk finally beat Red Hulk in HULK #6, but the mystery of the newcomer’s true identity remained a closely guarded secret, known only to the scarlet-skinned brute himself. Later, the red terror won a battle against She-Hulk in KING-SIZE HULK #1, so in HULK #7 the green giantess formed a team of Lady Liberators—herself, Valkyrie, and Thundra—to exact revenge for the beating while Hulk tried to investigate a crop of Wendigos in Las Vegas.