The original Hulk returns to incite the Intelligencia as Fall of the Hulks leads to World War Hulks!

Bruce Banner cured Marlo Chandler of being The Harpy in INCREDIBLE HULK #604, and then he and Skaar heard news of Mole Man’s monsters ripping up New York City. Traveling there, Banner set Skaar up to fight the beasts in INCREDIBLE HULK #605, and the young alien became a hero with average citizens afterward.

Banner convinced Red Hulk to kill General “Thunderbolt” Ross in FALL OF THE HULKS: GAMMA #1 and later attended the funeral. When the scientist sought out Red Hulk for an alliance in FALL OF THE HULKS: RED HULK #1, he learned of a daughter he didn’t know. After the scarlet brute fought The Thing in HULK #19, he and Banner set their sites on the Intelligencia, a cabal of genius criminals, in INCREDIBLE HULK #606, and Banner schemed with the Avengers to take down his crimson counterpart.

With a hand-picked team of Avengers in INCREDIBLE HULK #607, Bruce Banner battled the Intelligencia to rescue Betty Ross, whom he believed to be their prisoner. After meeting up with Red Hulk again in INCREDIBLE HULK #608, he failed to free the geniuses his foes held and instead fell prey to their devices. Banner escaped in INCREDIBLE HULK #609 with the unlikely help of Doctor Doom and discovered, to his chagrin, Betty to be the mysterious Red She-Hulk. 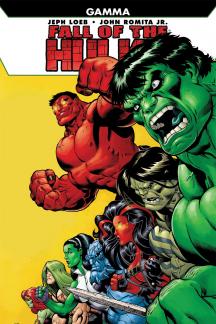 Doc Samson sacrificed his life in INCREDIBLE HULK #610 to confront “hulked-out” heroes created by the Intelligencia, but Banner absorbed all their ill-gained energies to once again transform into the one, the only, the original Hulk. Finally in the presence of his true father, Skaar steeled himself to kill his target. Hulk and son battled viciously in INCREDIBLE HULK #611, but when the jade giant drew his hand back to deliver a fatal blow, he thought better of it and Banner and Skaar reconciled their differences.

When the dust from the battle cleared in INCREDIBLE HULKS #612, Betty announced her desire to move on and not return to Bruce’s side. Captain America came calling in INCREDIBLE HULKS #613 to inform Banner of a mission to the planet K’ai he needed Hulk for, but Skaar insisted his father refuse. He then revealed the planet’s menace: his twin brother Hiro-Kala.