The Avengers, the Guardians of the galaxy and more stop by to lend a hand!

The Mad Squad traveled to Banner’s remote island in INCREDIBLE HULK #4, where they discovered the scientist’s gamma bomb. During a confrontation with his now-insane alter-ego, Hulk revealed in INCREDIBLE HULK #5 that Doctor Doom separated the two. Banner attacked Hulk with high-tech weapons in INCREDIBLE HULK #6, but when Amanda activated the bomb, the jade giant forced Banner to stay for its explosion. 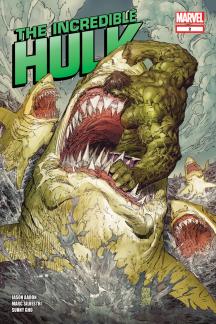 Alone in the desert, Hulk found himself attacked by a new Aquarius in AVENGERS ASSEMBLE #1. Divining the villain’s intention to waylay a U.S. Army caravan, the green giant bounded off to Stark Tower in AVENGERS ASSEMBLE #2 to get answers. The answer arrived in the form of an Ultimate Nullifier that the Avengers realized the new Zodiac coveted, but before Hulk could accept Captain America’s invitation to join his team, the Zodiac attacked.

The Hulk and the Avengers battled the villainous group on a S.H.I.E.L.D. helicarrier in AVENGERS ASSEMBLE #3, a skirmish that ended with the emerald behemoth killing Leo and Thanos arriving to interrupt the proceedings. Angered that Earth’s Mightiest Heroes interrupted his own plans to scoop up the Nullifier, he mind-controlled Hulk to fight his teammates in AVENGERS ASSEMBLE #4. Iron Man blew up the helicarrier to stop Thanos and the whole team later welcomed help from the Guardians of the Galaxy. 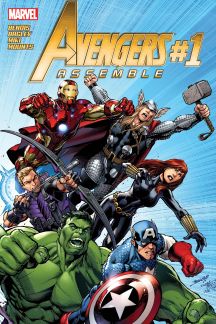 While everyone compared notes in AVENGERS ASSEMBLE #5, Captain America used Hulk to coerce information from the army. Knowing then that Thanos possessed a Cosmic Cube, both teams headed into space to stop him in AVENGERS ASSEMBLE #6, but the alien Badoon attacked them under the Mad Titan’s orders and they found themselves ejected into cold space for their troubles.

After being rescued by Black Widow in AVENGERS ASSEMBLE #7, Hulk joined with Thor to take the fight back to the Badoon. Thanos appeared again with his Cube and banished the Avengers to the Cancerverse. In AVENGERS ASSEMBLE #8, Hulk and the others joined forces with the Elders of the Universe to race back to Earth and confront Thanos there. Able to destroy the Mad Titan’s incomplete Cube, the Avengers won the day and watched as the Elders took the beaten Thanos away for incarceration.