Bruce Banner makes a deal with S.H.I.E.L.D., tumbles through time, and travels beyond Infinity with

The Hulk joined the Avengers on a mission to Mars in AVENGERS #1 to confront the terraforming of the planet by an alien called Ex Nihilo and his associates. The green giant found himself mentally subjugated by an alien woman named Abyss, who pitted him against Thor. In AVENGERS #2, the controlled Hulk watched as Ex Nihilo examined his captives, while on Earth, Captain America assembled a new team to rescue the heroes.

The Hulk fought the powerful Hyperion on Mars in AVENGERS #3, but Abyss freed him from her control when Captain Universe intervened and made a deal with Ex Nihilo. Back on Earth, Bruce Banner made a deal of his own with S.H.I.E.L.D. in INDESTRUCTIBLE HULK #1 for his services and those of his emerald-hued alter ego.

Iron Man took exception to Hulk’s new role in INDESTRUCTIBLE HULK #2, but the jade giant kept on smashing for S.H.I.E.L.D. in INDESTRUCTIBLE HULK #3 when he took on A.I.M. and the Quintronic Man over a volcano. The Hulk joined with the Avengers once again in AVENGERS #5 to aid the Shi’ar Empire versus an alien armada on the run from a cosmic menace.

Banner sent The Hulk off with S.H.I.E.L.D. agents to recover an item from lost Lemuria in INDESTRUCTIBLE HULK #4, and clashed with the Atlantean warlord Attuma over it in INDESTRUCTIBLE HULK #5. After a so-called “white event” in AVENGERS #7, Hulk helped his teammates track down Starbrand. When the new hero’s powers activated in AVENGERS #8, he threw the green behemoth into orbit, prompting Captain Marvel to save him by pushing Hulk back down to Earth and smashing into his opponent. 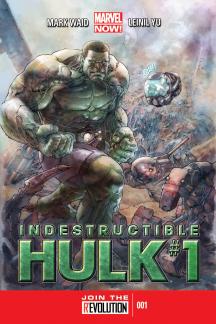 Starbrand returned to fight Earth’s Mightiest Heroes in AVENGERS #9, but Hulk and the others turned their attention to Ex Nihilo’s sentience bombs landing all over the planet. Bruce Banner traveled to Canada in AVENGERS #10 and encountered a strange effect there from a bomb that “evolved” him temporarily into his future self as The Maestro.

Captain America enlisted Banner to work on the problem of the rampant evolution brought on by Ex Nihilo’s devices in AVENGERS #14. Unfortunately, the stress of it all forced the scientist to Hulk-out in AVENGERS #16. Afterward, he joined with the Avengers to bring the alien and his crew over to the heroes’ side in AVENGERS #17 to present a joint force to leave Earth in INFINITY #1 to confront the approaching Builder fleet in outer space.

The Avengers suffered defeat from the Builders in AVENGERS #18, but they rallied in INFINITY #2 to cause some damage to Builder ships. The Hulk in particular smashed his way through a supposed “world killer” in INFINITY #3 and fought Thanos’ lackey Black Dwarf in AVENGERS #22. Following the destruction, the Avengers headed back to Earth in INFINITY #5 when they heard news of Thanos’ invasion of their home world.