The Jade Giant tackles Inhumanity, gamma monsters, and much more!

The Hulk and Earth’s Mightiest Heroes returned to that planet’s orbit in AVENGERS #23 to find Black Dwarf waiting for them. During the battle, Ronan the Accuser arrived to declare judgment on Thanos’ lackey. Later, after the Mad Titan’s defeat in INFINITY #6, and the release of the Terrigen Mist over the entire planet, Earth’s scientists looked to Bruce Banner to solve the problem in INDESTRUCTIBLE HULK #16. 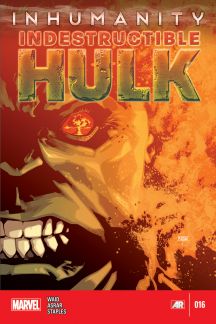 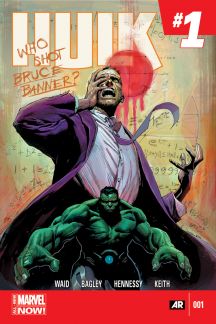 An unknown assailant shot the scientist in HULK #1, targeting a sensitive area of Banner’s brain that would cripple him mentally, but not force the transformation into The Hulk. The Abomination returned from the dead in HULK #2, and after surgery, Hulk battled the Avengers in HULK #3. Tony Stark used the Extremis Virus to cure Banner in HULK #4, but when it increased his intelligence, Bruce tweaked Extremis to create a new, smart Hulk persona nicknamed “Doc Green.”

Doc Green’s first task in HULK #5 involved tracking down everybody who ever “suffered” from gamma ray exposure, including his oldest friend, Rick Jones. After “curing” Rick in HULK #6, Doc Green set his sights on his son Skaar in HULK #7.