Doc Green embarks on his quest to rid the world of gamma-spawned creatures!

Following a strange side-trip featuring an appearance by Kluh, the “Hulk’s hulk,” in AXIS #4, the infamous green giant returned to his quest as the highly intelligent Doc Green to round up and “cure” all gamma-spawned personages. In HULK #8, he faced down the Red She-Hulk and when he walked away from the encounter, only a depowered Betty Ross existed.

In HULK #9, Doc entertained a visit from not only the X-Men’s resident intangible hero Kitty Pryde, but also the return of his alter-ego, Bruce Banner. The first of his final showdowns with the Red Hulk occurred in HULK #10, a fight that ended in an indecisive answer to which one stood as the strongest of them all. Doc Green next sought out Lyra, the Savage She-Hulk from an alternate future in HULK #11. 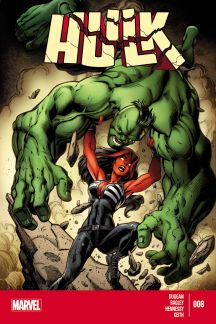 Doc’s AI program began to cause more headaches than solve problems in HULK #12, which coincided with Iron Fist’s lessons in fighting for the green genius and an issue involving the Gamma Corps. In HULK #13, Doc Green hired the “Merc with a Mouth,” Deadpool, for a very special mission.

Finally, in HULK #14, emerald and scarlet Hulks threw down for what would become their last fracas. Doc Green managed to take his crimson counterpart’s Hulk powers away in HULK #15, leaving only General “Thunderbolt” Ross, awaiting punishment for his crimes as Red Hulk.

After facing his cousin Jennifer Walters and deciding that she could retain her She-Hulk persona in HULK #16, the original Hulk allowed his Doc Green form to fade away, leaving the near-mindless brute of yore…