Guarding the Galaxy: A Team Divided

So, the Guardians of the Galaxy didn’t exactly get off to the best start. After finally settling on a name and going on a few fairly successful missions, the group learned that Peter Quill had asked Mantis to mentally push Rocket, Groot, Quasar, Adam Warlock, Drax, and Gamora into joining forces. As you can imagine, that angered them and they went their separate ways. In GUARDIANS OF THE GALAXY #7–12—by Dan Abnett, Andy Lanning, Paul Pelletier, Brad Walker, Carlos Magno and Wes Craig—the one-time teammates headed out into the cosmos to keep reality safe, prevent huge disasters, and bring back dead loved ones.

After newbie Major Victory—a member of the original, alternate reality Guardians—explained how the Badoon nearly destroyed humanity in his future, he, Rocket, Groot, Mantis, and Bug took out a Badoon Zom factory in the Callisto sector. In the process they battled a huge beast called a Monster as well as the undead soldiers until the Badoon actually agreed to end what they referred to as a “weapons test.”

Meanwhile, Gamora traveled with Adam Warlock in his mission to become head of the Universal Church of Truth. Upon visiting with the Church’s Matriarch she revealed that prophecy foresaw his ascendancy. Warlock liked the sound of that and took off, but Matriarch still had a problem: they just so happened to already have a Warlock-like cocoon in their possession.

For his part, Star-Lord wound up preventing a Blastaar-lead invasion of Negative Zone inhabitants in the regular universe with the help of Jack Flag and a few other prisoners in 42, a.k.a. the Negative Zone prison from Civil War. He ended up in the Negative Zone after trying to get Ronan to take down the Babel spire the Kree erected. The Accuser, still mad at Quill for inadvertently allowing the Phalanx to overtake the Kree War-Net, defeated Star-Lord in combat and had his people send him off to the Zone. After finishing up their Badoon mission, Rocket’s squad received word that Peter needed help so they teleported to the Negative Zone to back him up. Eventually the team and Flag made it through the portal to Camp Hammond where the collective geniuses promised never to open it again. 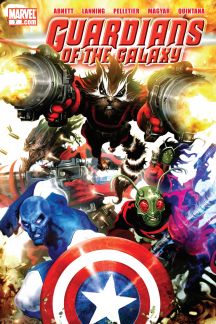 At the same time, Moondragon’s lover and father visited Mentor on Titan to see if the one-time Avenger might be recovered after dying in Annihilation: Conquest. To their surprise, Mentor killed them, sending them to a dimension inhabited by Maelstrom and the Dragon of the Moon. He played with their heads but also explained just how evil Moondragon’s other side, the Dragon of the Moon, continued to be.

Eventually, Phyla jumped into the Dragon, ripping Heather free in the process while the recently resurrected Quasar Wendell Vaughn popped in to help take out Maelstrom. Not long after, they all woke back up on Titan, as Maelstrom revealed that everything had taken place within Lord Oblivion and that a new Death avatar had been born.

All of these individual stories eventually lead to the Guardians reuniting in the next arc with a few new members in tow just in time to get tangled up in the War of Kings event!

Now that Moondragon’s back in action, let’s try to break down her history a bit! As a girl, Heather Douglas and her parents had the misfortune of driving past Thanos’ recently landed spaceship. The Mad Titan killed the parents and left the girl for dead. Mentor found Heather and took her to Titan where she learned to test both her physical and mental limits, eventually becoming a skilled martial artist and geneticist. Heather also boasted mental abilities that made contact with the Dragon of the Moon. She thought she chased the Dragon off, even taking on the name Moondragon, but its influence still persisted on a subtler level. Oh, by the way, Mentor also snatched up Heather’s dad’s spirit and turned him into Drax.

She eventually made her way to Earth where she appeared as Madame MacEvil in IRON MAN #54—also Thanos’ first appearance—and debuted as Moondragon over in DAREDEVIL #105. Heather became an Avenger for a while, had unusual relationships with Thor and Wendell Vaughn, held the Mind Gem as part of Adam Warlock’s Infinity Watch and even helped break up Rick Jones and Marlo Chandler’s marriage by running off with Marlo! Not long after that, she met up with Phyla-Vell and started getting involved in huge cosmic storylines like Annihilation. She died in her dragon form at the hands of Ultron in the pages of Annihilation Conquest and remained so until the above issues!

Next, Dan Abnett and Andy Lanning re-team with Paul Pelletier pit the Inhuman-lead Kree and Shi’Ar into mortal combat in War of Kings!

Marvel Studios and Secret Cinema team up to bring a new, epic adventure with the Guardians of the Galaxy and the Ravagers.