The Guardians of the Galaxy Battle for Reality

When the Guardians intervened in a war between the Shi’Ar and Kree and traveled through time!

If you only judged the Guardians of the Galaxy’s involvement in War of Kings by the main book, you’d miss a whole lot of behind-the-scenes adventures with the team trying to not only stop the conflict before it began, but also stop the battles from tearing apart reality! Luckily, Dan Abnett, Andy Lanning, Brad Walker, and Wes Craig chronicled those very adventures in the pages of GUARDIANS OF THE GALAXY #13–19.

Everything kicked off with the team enjoying some spirits in Knowhere’s bar, Starlin’s, just before a fight erupted. Adam Warlock appeared to stop the fisticuffs and he soon patched things up with Peter Quill in an effort to focus their attentions on stopping the growing conflict between Vulcan’s Shi’Ar and the Inhuman-led Kree. They hatched a relatively revolutionary idea to actually send two groups to each side and just talk it out. Quill lead Jack Flag, Gamora, Bug and Phyla—now going by Martyr—to visit Black Bolt and company while Rocket, Groot, Adam Warlock, Drax, and Major Victory ported to chat with Vulcan.

Rocket’s squad immediately fell into conflict with Vulcan and the Imperial Guard leading directly into an adventure with the Starjammers to save Lilandra, as seen in WAR OF KINGS. The diplomatic trip to the Inhumans also met with disinterest from the home team, but tempers only flared when Martyr drew her blade and threatened Crystal. Having failed on all fronts, both squads returned to Knowhere only to find their new adversaries hot on their tails, leading to a huge brawl that dissipated as soon as it started after Black Bolt freed Crystal. 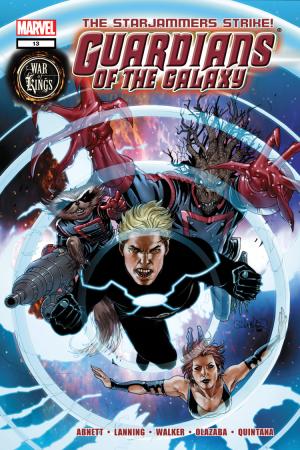 What came next got more complicated thanks to time travel and alternate realities, but essentially Star-Lord, Bug, Cosmo, Mantis, and Jack Flag saw what could happen if Black Bolt’s T-Bomb went off and tried to stop it by sending a message through the Celestial’s linked quantum telepathy. The group back in the present jumped into action, sending Adam Warlock down a dangerous path.

In order to secure the present reality, Adam attached it to a future that hadn’t been in use. Unfortunately, that reality happened to be the one where he turned into the evil Adam Magus. Even with the reappearance of the time-traveling Guardians, they were able to stop him from going full-on world breaker. Sadly, the fight did result in the apparent deaths of Martyr, Cosmo, Mantis, Gamora, and Major Victory. At the end of the day, to save existence, Peter Quill even shot his friend Adam Warlock, winning the day—but at what cost?

You might have noticed something interesting about everyone’s favorite talking tree as we’ve gone along: he said more than the ubiquitous “I am Groot” for a while. However, once he regrew, he stuck to the famous phrase. What’s the deal? Well, Maximus the Mad of all people explained it in the pages of GUARDIANS OF THE GALAXY #17: “The mature dendritic form of King Groot’s people is robust and heavyweight. Often, the organs of acoustic generation become stiff and inflexible. It may sound as if he is simply repeating his name, but that is simply due to the hardened formation of his larynx. You must listen to the sigh of breeze beneath it. The nuance of meaning.” Apparently in those early appearances when his vocabulary seemed wider, it just meant he hadn’t fully matured yet!

In this article: Guardians of the Galaxy, Kree, Lilandra Neramani

Go behind-the-scenes of the brand new attraction at EPCOT!

Welcome to the Treasures of Xandar!