Guarding the Galaxy: The Thanos Imperative

The cosmic heroes must team with the Mad Titan to fend off the Cancerverse!

Dan Abnett and Andy Lanning brought their sprawling space epic to a close with THE THANOS IMPERATIVE in 2010. Up to that point they’d written the ongoing series’ GUARDIANS OF THE GALAXY and NOVA as well as a variety of tie-in limited series and one-shots to bolster events like War of Kings and Realm of Kings. It all came to a close—mostly—in the pages of THE THANOS IMPERATIVE.

Kicking off with a one shot called THE THANOS IMPERATIVE: IGNITION, the writers worked with artist Brad Walker to set the event’s stage as the Guardians still struggled to keep a hold on the recently returned Thanos. At the same time, the Shi’Ar, Kree, Inhumans, Quasar, and even Blastaar joined forces to hold back any attacks coming from The Fault. Good thing too, because, as Nova discovered, the Cancerverse’s number one baddie revealed himself as Lord Mar-Vell.

The series then got under way with art from Miguel Sepulveda as ships burst out through The Fault with Mar-Vell sending the Revengers—evil versions of the Avengers—out to find this reality’s avatar of death in order to kill it. Their gods, the ones they serve, needed an absence of death—like the one in their reality—in order to thrive. With Thanos, the new avatar of death, the Guardians headed into the Cancerverse to figure out what they can do to stop Mar-Vell and company. Meanwhile, Galactus and the other cosmic concepts joined the fight along with Silver Surfer.

Back in the Cancerverse, Thanos and company follow Vision to the android stronghold of Titan where they discover that this version of Earth’s heroes decided to make a deal with the Many Angled Ones to save Captain Marvel’s life. They effectively killed Death which lead to the rampant growth of life on their end that required moving into a fresh new dimension.

Meanwhile, Nova put together a team of wildly powerful cosmic individuals including himself, Quasar, Beta Rey Bill, Ronan, Silver Surfer, and Gladiator to go on a quick strike mission to get back kidnapped folks like Namorita and Major Victory who had been taken by Mar-Vell to test their anomalous nature in hopes of finding the avatar. Eventually, the Guardians got Thanos to the place where he could square off against Mar-Vell, but the Mad Titan pulled a fast one and offered his own death because he never wanted to return to life in the first place.

Mar-Vell agreed, attempted to kill Thanos, and in the process brought Death to her devotee’s side. With a touch, she killed Mar-Vell, but left Thanos alive without another word. Enraged, the Titan rampaged once again. Nova had joined the fray at this point, but Star-Lord teleported his Guardians teammates away so only the two of them would face the consequences.

Three days later, The Fault had completely shut and the assembled cosmic warriors gathered on Attilan to honor the dead including Peter Quill and Richard Rider. Quasar and Rocket took a moment to talk about their departed friends, positing that even if Star-Lord and Nova survived, they’re stuck in a closed-off universe with Thanos. And with that, the Guardians of the Galaxy died…for a while.

Like many stories revolving around Thanos, this one also featured a great deal of input from Drax. As touched on when discussing Moondragon’s origins, Thanos’ dad Mentor used Arthur Douglas’ soul to create Drax the Destroyer, a wildly powerful being whose sole reason revolved around killing Thanos, who had killed Arthur in the first place. The hulking brute got a makeover in the pages of Keith Giffen and Mitch Breitweiser’s DRAX THE DESTROYER limited series. This sleeker and smarter version succeeded in his life’s mission in the pages of ANNIHILATION #4 when Drax punched a hole through Thanos’ chest and came out the other side with his heart. 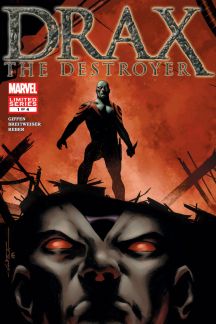 So, when faced with his prey’s return in THE THANOS IMPERATIVE, Drax prepared himself by arming heavily and putting on a uniform more reminiscent of his earlier appearances. Drax even seemingly killed Thanos at the end of the third issue, but the Titan revived and returned actions in kind with Drax who did not come back from his encounter.

Next, find out what Rocket Raccoon and Groot got up to after the Guardians disbanded.