An evil goddess fights the X-Men with an army of the dead!

Death follows the X-Men wherever they go.

One of the unfortunate side effects of fighting for equality, the mutant race negotiates with extinction on a semi-regular basis. And this practice reached a climax when the X-Men faced an army of dead reanimated to kill the living.

Selene, a the psychic vampire, used a Techno-Organic Virus mixed with her own dark magic to create a new concoction that raises the dead. She used that formula against the X-Men in an event called Necrosha that began in 2009 with the one-shot X-NECROSHA and then continued between X-FORCE, X-MEN LEGACY, and NEW MUTANTS. 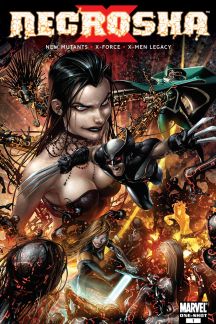 Written by Craig Kyle, Chris Yost, Zeb Wells, and Mike Carey with art by Clayton Crain, Diogenes Neves, Clay Mann, and others, this story made the X-Men reflect on some of their biggest mistakes—and face them like never before.

This damned enterprise served Selene’s quest to become a goddess. On that quest, she and her undead crew—which included Wither, Blink, Senyaka, Mortis, and Eli Bard—utilized an army of zombie mutants to attack the X-Men in their home of Utopia. While the X-Men fought the horde, Selene and her inner circle traveled to Genosha where they made thousands more mutants and former mutants rise from the dead as a means to build her seat of power.

In NEW MUTANTS issues #6, #7, and #8, the recently risen Doug Ramsey followed Selene’s command to destroy his old teammates after helping the Hellions break into Utopia. Luckily for those involved, Warlock eventually showed up and helped quell the danger.

Meanwhile, over in X-MEN LEGACY #231, #232, and #233, a team consisting of Nightcrawler, Rogue, Colossus, Psylocke, Magneto, Husk, Trance, and Blindfold raced to Muir Island at the behest of Destiny. Once there, they faced off against Proteus—one of the X-Men’s deadliest foes. The ensuing battle led to teammates fighting possessed teammates, and only Magneto’s intervention could manage to save the day.

The main action took place in X-FORCE issues #21, #22, #23, #24, and #25, as the more violent X-Squad dealt directly with Selene and her plans. Working together to seize Selene and her evil cohort, the team also fought off a pack of Necroshan zombies. Though brave in their efforts, the X-Squad remained unable to stop Selene from undergoing a rite to reach her goddess form. 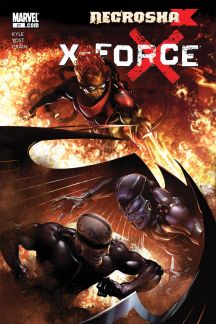 In response, Warpath communed with his dead brother, John Proudstar, A.K.A. the first Warpath. They used their ancestral ritual to outfit the team with abilities to adequately counter the new deity. And at last, the mutants—the living mutants—prevailed.

NEW X-MEN #23 and X-FORCE #11 provide further background to the players in the Necrosha epic. The former explores Wither’s past with the title team and illustrates how he started working with Selene. In the latter issue, called “Who The Hell Is Eli Bard?”, readers learned the answer to the titular question—and witnessed his first ever meeting with Selene.

And to see how Selene selected the rest of the major characters in her scheme, read up on X-NECROSHA: THE GATHERING. This story features some of the creepiest, most spooktacular monster art in the series!