Look back on the muck monster’s solo debut!

Having emerged from the swamp for the first time in 1971’s SAVAGE TALES #1, Man-Thing starred in ADVENTURES INTO FEAR from #10–#19 before earning his first solo series in 1974.

MAN-THING, written by Steve Gerber and drawn by Val Mayerik with Mike Ploog, the series’ first book continued the action of the final ADVENTURES INTO FEAR issue—which also saw the first appearance of Howard the Duck! 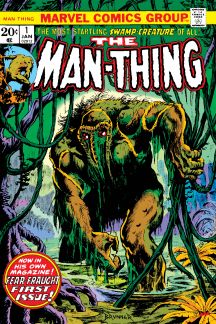 After the mallard tripped and fell into a void, Man-Thing, Dakimh the Enchanter, Jennifer Kale, and the barbarian prince Korrek set out to restore all realities back to order. Meanwhile, The Overmaster and the pretender gods of the Congress of Realities attacked Dakimh’s home realm, Therea. There, a battle raged between The Overmaster, his minions, and Man-Thing—resulting in the universe’s salvation from annihilation.

Though the series began with a more fantastical slant, the creative team introduced more horror elements in later issues as the Man-Thing continued to protect the Nexus of All Realities. These stories played with a range of genres and characters—from bikers and corrupt businessmen to wrecking crews and even The Foolkiller, who made his first appearance in issue #3!

Issue #5 saw the ghost of a clown, who died in a swamp, encounter the Man-Thing. Though the creature could not speak or remember his lost humanity, he moved to put the clown to rest in a proper manner. 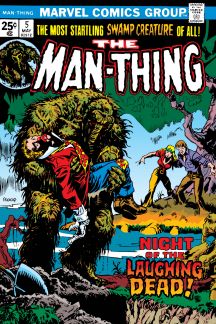 Later, Ayla—a tightrope walker from the carnival that employed the clown—gave up her job to search for him in the swamp, aided by the series’ stars Richard and Ruth. When they came upon the scene of the death, Ayla called out to her friend, who appeared in his ghostly form at the edge of the bog.

In the following issue, the ghost clown took control of Ayla, Richard, and Ruth, regaling the reader of his sad life—as three mysterious, hooded figures watched and critiqued the story.

The figures turned out to be agents of Hell, Heaven, and the In-Between. They stated that the clown’s death was unnecessary and decided to punish the clown for his ill-conceived decisions. Having witnessed these events, Man-Thing stepped in and fought the creatures off—allowing the clown to rest—perhaps not in peace, but to rest nonetheless.

Man-Thing might seem like the type who doesn’t play well with others, but he’s actually been a part of more teams than one might expect. In 1972, he formed the original Legion of Monsters in MARVEL PREMIERE #28. In the 1990s, he joined Franklin Richards, Howard the Duck, Arite, Leech, and Tana Nyle in GENERATION X and then in a three issue limited series called DAYDREAMERS. And most recently, in the aftermath of Siege, when Luke Cage took over the Thunderbolts, Hank Pym used Man-Thing as a team transport! And not long after that, he also joined Phil Coulson’s Howling Commandos. Not bad for a guy who spends most of his time hanging out in swamps!

Tomorrow, Dan Abnett, Andy Lanning, and Michael Lopez dig into the history of the Marvel Universe’s number one monster hunter with BLOODSTONE!