Halloween Spooklight: Curse of the Mutants

The X-Men have a long history dealing with vampires, especially Dracula. The legendary force of darkness encountered the mutants in classic stories seen in UNCANNY X-MEN #159 and UNCANNY X-MEN ANNUAL #6. So, when a vampire blew himself up in the midst of a bunch of people – including X-Man Jubilee – the team immediately thought their old foe orchestrated the entire thing.

However, as seen in "Curse of the Mutants," a story from the first six issues of the 2010-launching X-MEN series by Victor Gischler and Paco Medina, Dracula's son Xarus actually pulled the strings on that particular operation.

After the team found and started working with Blade, he revealed to the mutants that Dracula's son had beheaded him and not only taken over as lord of the vampires, but also united all the various factions into a more cohesive unit, as seen in the DEATH OF DRACULA one-shot by Gischler and Giuseppe Camuncoli.

The X-Men also learned that the vamp-bomb didn't completely turn Jubilee into a vampire, but she felt a gnawing desire to go and meet Xarus. This turned out to be the whole point of the bombing because he wanted to see if he could get mutants to come to him in his efforts to unite the two unique bloodlines. When Jubilee showed up, he fed on her and turned her completely into a bloodsucker!

To try and give their enemies something else to worry about, Cyclops had Dracula's head and body reunited, even letting him go out in the wild, much to the chagrin of many of his teammates and Blade.

Meanwhile, upon learning of Jubilee's departure, Wolverine waded into a sea of vamps to get her back. He clawed his way through plenty of them, but eventually got bitten himself and sided with Xarus and his crew.

With their forces bolstered, Xarus ordered the combined efforts of all his assembled bloodsuckers to launch an attack on Utopia with the sole goal of turning as many mutants as possible. 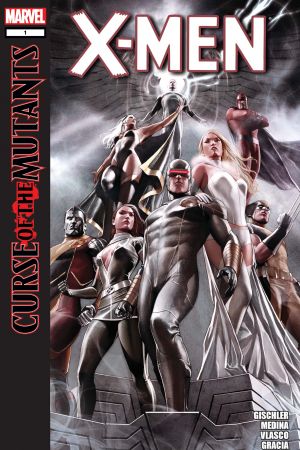 Foreseeing the attack, Cyclops assembled a group of tough-skinned – and hard-to-bite – X-Men to help fend off the direct attack on Utopia while Namor and the Atlanteans turned back the sea forces while Angel did the same in the air.

Xarus thought he would turn the tide by dropping Vamperine into the action, but Scott Summers showed off his own planning skills by revealing that he'd had their genius scientist Dr. Nemesis inject Logan with nanobots that could turn his healing factor on and off. With the press of a button, he cured Wolverine of his vampirisim and completely turned the battle around to the X-Men's favor.

With the vampire forces destroyed, Xarus found himself under fire from the heads of the other factions, but their anger couldn't hold a candle to Dracula's as he appeared from the shadows. The ensuing father-son moment wouldn't make it onto any greeting cards, but it did put Dracula back on top of the now incredibly-diminished vampire ranks. Though Blade wanted to remove his head once again, Cyclops stopped him, honoring the deal they'd made by bringing him back to stop Xarus.

The story ended with Dracula unsure of whether they'd implanted something into him when they had his head and body for the better part of a day. More importantly, while Jubilee lived, she still had the curse of the vampire running through her. Eventually, they got her an amulet that would keep sunlight from hurting her and supplied her with blood allowing her to get back into the field, raise her adoptive son Shogo and eventually lead a new crop of teen mutants in GENERATION X, wherein Quentin Quire eventually cured her of her bloodlust.

If you're still thirsting for more mutant versus vampire goodness, don't fret, we've got just the vein of stories for you. “Curse of the Mutants” didn't just pump through X-MEN, but also bled into other books as well. In addition to the first four issues of NAMOR: THE FIRST MUTANT, the story gushed into "Curse of the Mutants" entries like BLADE, SMOKE AND BLOOD, STORM & GAMBIT and the anthology title X-MEN VS. VAMPIRES. The Merc with the Mouth even got in on the action when the crossover bit into DEADPOOL #30-#31!

In this article: X-Men, Dracula