The 1970s saw the resurgence of Marvel monsters. With the likes of Ghost Rider, Frankenstein’s Creature, Son of Satan, Man-Thing, and even Dracula running around, the Marvel Universe brimmed with the horror genre. And in 1972, readers met a new monster: Jack Russell, a werewolf with a complicated past.

After debuting in MARVEL SPOTLIGHT, Russell proved to be a strong enough lead to earn his own series—WEREWOLF BY NIGHT. The series began with the title character frozen as a statue, recounting his journey to Miles Blackgar’s island to retrieve a mystical tome called the Darkhold. Jack also recounted his father’s status as both a mage and a werewolf—passing down his lupine likeness. Rounding out the recap, Russell also disclosed that Blackgar’s mutant gorgon daughter Marlene turned him into his stoney state. 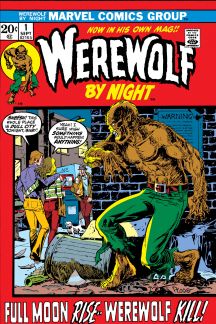 As the sun rose, however, the werewolf gave way to the man. And before long, a friend named Buck Cowan appeared to help his friend back to his house. There, Jack showed Buck the Darkhold—but Marlene suddenly appeared alongside her muscle—a man named Strug—and her father, Miles. They had come for the book.

Without wasting a moment, Jack and Buck made a break for it, returning to the werewolf’s hidden home. Followed by Marlene and her crew, Jack was captured—but the book went unfound. That night, Jack transformed into his beastly form and escaped.

Leaping into battle with Strug, the werewolf sat defenseless when Marlene pulled a gun to stop the brawl. Set to finish off the creature of the night, she began to turn him to stone once again…but Jack, having expected the move, positioned himself in front of a mirror, which reflected her power, turning herself and her father into statue form.

The Darkhold first appeared in the Jack Russell story MARVEL SPOTLIGHT #4 and has gone on to become a major supernatural force in the Marvel Universe. The first volume came from a demon named Chthon—and in recent times, heroes like Doctor Strange have had their share of difficulty with the power of the book. The Darkhold even launched its own 18 issue series in 1992, wherein Victoria Montesi and her colleagues tried to stop missing pages from doing harm to humanity. In the past few years, Baron Zemo had his hands on the tome, using it to generate a bubble around New York City and possess Scarlet Witch with Chthon’s spirit during Secret Empire!

Tune in next week for more bone-chilling Halloween Spooklights as we dig up MORT THE DEAD TEENAGER!