Jack Russell finds himself at the center of a mystical plot run by a circus of evil!

Through October, a new supernatural character or story from the Marvel Universe gets a spooky spotlight leading up to Halloween!

As a kid, Jack Russell often dreamed of running away to join the circus. But he never thought that he'd become the main attraction as he did in 1973's WEREWOLF BY NIGHT #6-#7 by legends Len Wein and Mike Ploog.

Between his childhood and reaching his late teens, Russell discovered his true nature as a werewolf as seen first in MARVEL SPOTLIGHT #2-#4 before he earned his own series along with his sister Lissa and friend Buck.

In WEREWOLF BY NIGHT #6-#7, the dangers of Swami Rihva come to light as he seeks to find the werewolf he read about in the newspaper and begins scheming to get Russell in his clutches by luring him to the circus. 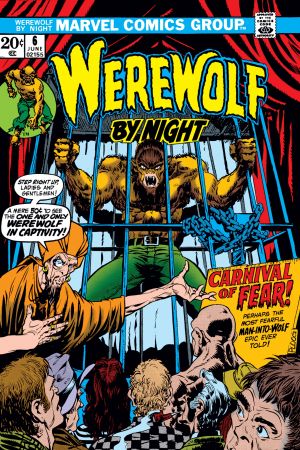 Luckily for the villain, Jack appreciates circuses from his childhood and decides to go. Drawn to the swami's tent, Jack enters of his own free will, but soon falls under the spell of the mystic's hypnotic gas. With Russell under his control, Rihva has Jack taken away and pulls up stakes on the entire operation.

At their next stop, outside a desert town, Rihva tells the rest of the circus that on the third night of the full moon, Russell will be used in a ritual that will benefit them all. Until that day, though, they make some coin off of him by putting him in a cage on stage and letting people watch him transform into a werewolf!

However, not everyone in the company likes the idea of keeping Jack around. Mige the lion tamer opens up his cage, but the Werewolf by Night cannot hold back his animalistic nature and attacks his supposed savior. During the ensuing chase, Mige lures him into the big cat cage!

Luckily, the strong man Big Elmo jumps in to help Jack's furry alter ego fight off the cats which are soon completely quelled by the appearance of the swami. The next day, when Russell returns to human form, Elmo brings him back to his original cage with the captive man still under Rihva's docility spell.

Once re-jailed, Jack learns about Rihva's plans from Elmo. As the man-mountain recounts, Rihva heard about a mystical object called the Bloodstone years ago that would lead to an incredible treasure. Eventually he got his hands on the object and tried using it to gain riches. However, the swami realized his telepathic powers weren't supernatural enough, so he gathered others with unique abilities to see if he could use them. Though they also failed, he turned the group of outcasts into a traveling circus to disguise their true mission of finding the treasure. Soon after they heard about Werewolf by Night and hoped he might be the key, hence the wolfnapping.

Meanwhile, concerned about their traveling companion, Lissa and Buck eventually make their way to the circus' next stop. Immediately after finding Jack, the duo fall under Rihva's mental manipulations and are turned into Serpent Girl and Chicken-Man for the carnival-goers' amusement.

That night, as the swami attempts the ritual to find the path to the treasure, Elmo breaks in and stops him when the leader reveals that they'd have to kill Jack. After that, all hell breaks loose as circus performers kill each other, the big top tent catches fire and Rihva threatens Lissa, who soon broke out of her trance. However, the villain briefly sees the error of his ways when he probes too deeply into the monster's mind to see what he intends to do to his captor.

If the Bloodstone sounds familiar that's because it is... maybe. Back in the Hyborian Age, a meteorite crashed to Earth and came under the control of an evil entity. When a human tried fighting the demonic being, the asteroid exploded, embedding part of itself in his chest. That man became Ulysses Bloodstone, monster hunter! Though he perished plying his craft, his daughter Elsa took up where he left off while his son, Cullen, flirted with supernatural forces in a much different way as seen in AVENGERS ARENA and AVENGERS UNDERCOVER. Given that the initial asteroid broke into all those pieces, it seems possible that the one used to make the map was part of the one that created the monster hunters.

In this article: Werewolf By Night

The hosts of 'Marvel's Pull List' spoke to ‘Moon Knight’ Executive Producer Grant Curtis about the secret comics hidden in the show!

His friends and his foes! Dive deeper into Moon Knight’s world with the characters that define him.

Prepare for ‘Ghost Rider: Kushala’ with Writers Taboo and B. Earl

We speak to the series creators behind Kushala’s Infinity Comics run on Marvel Unlimited.