How 'Outlawed' #1 Strikes at the Heart of the Champions

Warning! This article contains spoilers for today's OUTLAWED #1, so read on at your own risk, o frantic ones!

Although the debut of the Fantastic Four led to the Marvel Universe as we know it, the heart of this world has always been its young heroes. Spider-Man got his start as a teenage hero, while the original X-Men were also teens when they first fought for a world that hates and fears them. And who can forget the young teams like Power Pack and New Warriors who carved out their own legends?

The latest incarnation of the Champions were formed after CIVIL WAR II, because the young heroes were disgusted by the way the Super Hero community was torn apart. But in today’s OUTLAWED #1, writer Eve L. Ewing and artist Kim Jacinto have changed the game for the Champions. What was once a movement has now become a cautionary tale. But is the real danger teenage Super Heroes? Or is there a more insidious threat that we’ve missed?

Even though Amadeus Cho, AKA Brawn, now spends the bulk of his time as the leader of the new Agents of Atlas, the Champions are still essentially a powerhouse group with some of the most prominent young heroes in the Universe. However, Brawn’s leadership was sorely missed when tragedy struck at Coles Academic High School... The team wanted to protect 16-year-old environmental activist, Ailana Kabua, from a threat against her life. Someone associated with Roxxon wants Ailana dead, and they sent both a dragon and a hit squad to silence her.

This is where the expanded Champions roster worked against their common goal. There wasn’t a clearly defined strategy and the Champions were essentially tripping over each other during the battle with the dragon. Viv Vision grew frustrated, and found herself in the way of Power Man’s Chi attack. When she was struck, Viv lost all control and nearly destroyed the surrounding area herself. Ironheart came up with a plan to end the crisis, but Riri Williams was left in tears after Viv's survival was in doubt.

To compound the tragedy, Kamala Khan, AKA Ms. Marvel, apparently pushed her powers to their limit while saving Ailana’s life as the school collapsed. In the aftermath, several of the young heroes faced a congressional inquiry. Although Captain America spoke passionately about the Champions’ contributions, Captain Marvel was brought to task about her history mentoring a team of young heroes. Back in MS. MARVEL (2015) #8, Captain Marvel placed Kamala in charge of the Carol Cadets during the events of CIVIL WAR II. However, Kamala’s teammate, Lockdown, abused her position. In the trial, Carol was discredited when it was pointed out that both Lockdown and Discord became villains after the Carol Cadets were formed. 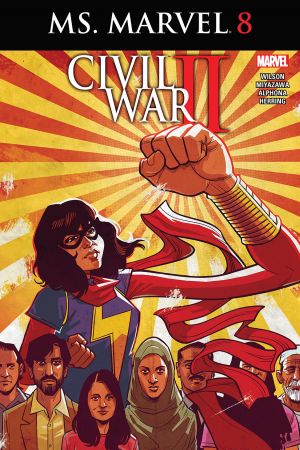 The parallels between OUTLAWED #1 and the original CIVIL WAR are unmistakable. But while the Stamford tragedy was caused in part by the New Warriors’ selfishness and recklessness, the Champions at least had their hearts in the right place. Still, it’s unsettling to see the New Warriors’ Justice and Speedball working in tandem with Senator Patrick, the man behind the Underage Superhuman Welfare Act. Patrick has already lined up the Child Hero Reconnaissance and Disruption Law Enforcement to impose the new law.

Beyond the wacky acronym, something about C.R.A.D.L.E. just doesn’t add up. At the very minute C.R.A.D.L.E. was revealed to the public, agents were coming for Moon Girl in her home while also raiding the Champions Mobile Bunker and Ironheart's lab in Chicago. Meanwhile, Kamala has found herself in a hospital fighting for her life and completely unaware that all of this is being done in her name; “Kamala’s Law” is being used to destroy everything that Ms. Marvel represents. And she’s not going to be happy about it...if she wakes up.

Do the citizens of the Marvel Universe want a third Civil War between the Super Heroes? Because this is almost exactly how the first Civil War fractured the bonds of the heroic community. This story will continue in CHAMPIONS (2020) #1 and across the 616—and it’s going to be up to them to pick up the pieces and live through the difficult months ahead...

For the latest Marvel comics releases, please reach out to your local retailer about services they may offer, including holding or creating pull lists, curbside pick-ups, special deliveries, and other options to accommodate. Find your local comic shop at comicshoplocator.com today, then read all of OUTLAWED #1 for yourself right now!