How 'X of Swords' Part 2 Raises the Stakes

Warning! This article contains spoilers for today's X-FACTOR #4, so read on at your own risk, True Believers!

Since the Dawn of X, the X-Men and their mutant nation of Krakoa truly believed that they had conquered death, thanks to the Resurrection protocols and the powers of The Five: Hope Summers, Egg, Elixir, Proteus, and Tempus. Even Kate Pryde was able to return from the grave in MARAUDERS #12, after 17 previous failed attempts.

But in this week’s X-FACTOR #4, writer Leah Williams and artist Carlos Gomez added a major complication into the second chapter of X OF SWORDS. Now, death is back on the table, and the mutant nation has good reason to be frightened by the impending invasion by the Arakkii.

Following Summoner’s betrayal of Apocalypse, and Rockslide’s demise in Otherworld, the remaining mutants retreated through the External Gate back home to Krakoa. Rictor was also struck with a poisoned arrow while fleeing. Much to his own surprise, Apocalypse displayed real emotion towards Rictor as he urged him to resist the poison ravaging his body; somehow, En Sabah Nur has truly come to care about Rictor. Later in the issue, when Rachel Summers went into Apocalypse’s mind, he saw Rictor alongside his treacherous children in the Arakkii. Perhaps Apocalypse sees Rictor as a surrogate son.

It should be noted that Unus the Untouchable was oddly silent after being rescued by the Arakkii. Unus also had his own minor spotlight in a single panel that felt oddly ominous. But the focus of the mutants was on the destruction of the External gate. Saturnyne closed the gate, but Krakoa briefly threw a tantrum as if the mutants had done it themselves. Only Doug Ramsey was able to talk the mutant island down.

In X OF SWORDS: CREATION #1, Saturnyne placed a prophecy within Polaris’ mind. Williams and Gomez pulled off a neat trick in this issue by keeping most of the focus on one of their regular characters in X-FACTOR while also advancing the overall story of the event. Polaris also bore witness to one of the most alarming developments of X OF SWORDS... Rictor perished from his wounds, and he was promptly resurrected without incident. However, Rockslide’s return was another matter entirely.

When Professor X tried to put Rockslide’s mind back into his new body, it disconnected The Five from each other and briefly shorted out Xavier’s Cerebro helmet and its backup units at the House of M, the Summers House, The Pointe, and Moira's No-Place. That was also the first time we’ve seen Moira MacTaggert since the end of HOUSE OF X. 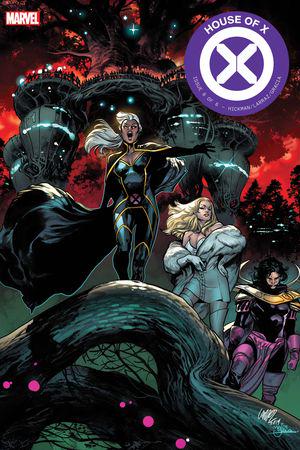 In his panic, Egg destroyed all of the eggs that were to be used on resurrections. Xavier also confirmed that Rockslide is no longer Santo. He’s someone new. More alarmingly, The Five theorize that because Santo died in Otherworld, it corrupted his backup in the Cerebro unit. This means that anyone who dies in Otherworld will be gone for good. And at the moment, the Resurrection protocols are suspended for everyone.

Much to her humiliation, Polaris only remembered Saturnyne’s prophecy when she was berated by her father, Magneto, in front of the Quiet Council. But later in the issue, Polaris put the final pieces together, literally, out of Rockslide’s original body. It was a casting circle for Krakoa’s champions, and now most of the prophecy has been deciphered.

Assuming Doug was correct, he will be one of the champions with Warlock as his partner and blade. Magik and her Soul Sword lead the way, while Cable will look to bring the Light of Galador to the table. Presumably Captain Britain, AKA Betsy Braddock, could end up wielding the Sword of Might there, while Wolverine has his eyes on reclaiming the Muramasa blade. Apocalypse was also confirmed as a champion, despite his grievous wounds.

Gorgon was a surprise addition to the champions of Krakoa, at least under his interpretation of the prophecy. Storm’s part was also pretty self-evident: “Once goddess, once queen, one sword with which to split the sky in twain. Vibranium inlaid, a tempest constrained, the wrath of heavens comes wielding a legacy.” We know that one of the blades destined to be used by the X-Men is called Skybreaker. That seems like a good fit for Storm.

But that’s only eight champions for ten swords. Who will join their brother and sister mutants in battle against the might of the Arakkii? We’ll find out when X OF SWORDS continues next week with WOLVERINE #6 and X-FORCE #13!

Read X-FACTOR #4 for yourself at your local comic shop today!

Earn Points, Get RewardsJoin NOW!
In this article: X-Factor, X-Men, X of Swords