Medusa, Black Bolt, and company fight for one of their own!

For a group that once preferred to avoid contact with humans and live in the shadows, the Inhumans sure have made a habit of getting involved in major events the past few years. That happens when your former king destroys your city over Manhattan while also releasing a cloud that changes anyone with Inhuman DNA into a NuHuman!

In last year’s Civil War II, a NuHuman named Ulysses inadvertently drove a wedge between Iron Man and Captain Marvel. Carol Danvers wanted to utilize Ulysses’ apparent ability to see the future in order to stop threats of all shapes and sizes, while Tony Stark feared what a reliance on an untested power set might lead to, especially if someone besides the heroes used it. 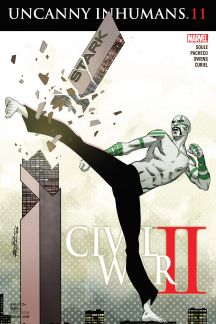 It started when Ulysses foresaw a devastated New York City and told Medusa, who then helped warn the other heroes and they stopped a Celestial Destroyer. The Inhumans revealed themselves to the Avengers, but Tony remained skeptical. The next time, Ulysses told the assembled forces about a Thanos attack which lead to James “War Machine” Rhodes’ death, enraging Iron Man.

What could have just been a clash of ideals turned into something much bigger when Tony decided to fly into New Attilan and kidnap Ulysses! The Inhumans responded in turn by breaking into Stark’s building and nearly bringing it down around all of them. Future visions led to the death of Bruce Banner and just about as many false alarms as actual crimes. Meanwhile, back on New Attilan, Karnak helped Ulysses focus his abilities. Eventually, it came to light that the young Inhuman absorbed all kinds of information and used that as a way to guess what would happen, hence the hits and misses.

To dive even further into Ulysses’ time during this huge event, check out CIVIL WAR II: ULYSSES by Al Ewing, Karl Kesel, and Jefte Palo. Originally presented as an Infinite Comic and then published in a three-issue limited series, the story saw Karnak awakening to the realization that Ulysses would change their whole world. The master of martial arts and fault-finder trained the young NuHuman to harness his powers.