The importance of the Marvel Knights imprint can not be overstated. The Joe Quesada and Jimmy Palmiotti shingle not only created a ton of buzz, thanks in large part to Kevin Smith writing DAREDEVIL, but also shined a light on some under utilized characters including the Inhumans! 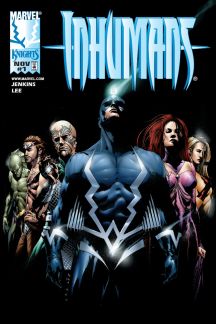 One of the original MK titles, INHUMANS featured writer Paul Jenkins and artist Jae Lee telling a grand and sweeping story that ran for 12 issues between 1998 and 1999. After years of guest spots and back-up stories, the denizens of Attilan regained the spotlight and showed the world exactly why their adventures continue to draw readers in.

The series kicked off with the introduction of young Inhumans just about to go through the Terrigenesis process. The resulting powers and abilities not only alter their appearance, but also their social status, leading to more than a few broken relationships. However, that didn’t stop the first flyer in decades, Tonaja, from enjoying her new role in the Inhuman community.

Not everyone enjoyed the exuberance of youth, though. Black Bolt seemed trepidatious about almost everything while Medusa feared she’d lost her connection to her husband and king. At the same time, Karnak’s abilities showed him that Attilan might just have more weaknesses than expected. And, of course, Maximus the Mad plotted and planned even from his prison cell.

More problems brewed outside of Attilan’s domed borders. Thanks to Maximus’ manipulation of the teleported Woz, he supplied outside forces with technology and plans that would allow them to bring the walls down and invade the mysterious place.

With Maximus’ plans in full swing, internal strife mixed with outside attacks, and gunpowder and explosions both metaphorical and literal blew up all around Attilan. If only Black Bolt would act!

As it turned out, Black Bolt had control of the situation in ways that almost no one expected. In fact, his plan lead to Medusa losing her hair, the manipulation of Gorgon and Triton, war befalling Attilan and the Inhumans’ return to the mountains.

In INHUMANS #3, Karnak dropped some incredibly interesting knowledge bombs about Terrigenesis. A scientist named Ultarnt researched the process and came up with some interesting theories. After researching the various changes, she posited  that they actually happen in response to events about to happen. “At times of conflict, the configurations become aggressive,” Karnak said. “When climactic changes occur, our mutations adapt in turn.” Basically, the entire Inhuman race evolves as a puzzle, and if one piece falls away unexpectedly early, that power set will return in the next three years.

Next time we catch up with the Inhumans as they target the Earth after Quicksilver steals Terrigen Crystals to return his missing mutant powers in SON OF M.

Earn Points, Get RewardsJoin NOW!
In this article: Inhumans