Medusa leads New Attilan into a brave new world as more and more Nuhumans pop up all over the world.

Bred by an alien race to be a warrior caste and possessing alien DNA, the Inhumans exist as humans possessed of incredible and otherworldly powers when exposed to the substance known as Terrigen. Living secretly, for the most part, among their fellow man, the Inhumans forge their own destiny as a separate society. Dig into the history of the Inhumans with these Marvel Unlimied comics in preparation for “Marvel’s Inhumans” heading to IMAX and ABC this fall!

In the wake of Black Bolt’s decision to blow up Attilan and explode the Terrigen Bomb while fighting Thanos in INFINITY, the world changed forever. The Terrigen Mist traveled around the world activating unknown Inhumans – called Nuhumans – and Karnak lost his mind, just for a moment as seen in INHUMANITY #1 by Matt Fraction and Olivier Coipel. 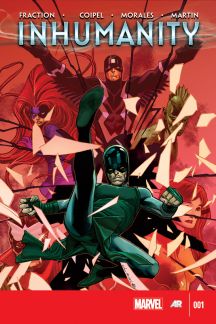 The issue also gave a concise history of the Inhumans. The Kree experimented on Neanderthals 25,000 years ago in an attempt to counteract their own stalled-out evolution. Already many steps ahead, the Inhumans created their own community and built Attilan. Eventually Randac came along and started experimenting with Terrigen Crystals. He realized that his people should have the ability to defend themselves against the Kree should they ever return. Randac subjected himself to the mists, pushing his own evolution to its inevitable conclusion, the same process that’s used to this day.

In the next issue, by Fraction and Nick Bradshaw, we learned even as the humans deal with the destruction of Attilan in New York City and the presence of all these new cocooned individuals, the Inhumans remained in the dark about where their children resided after the evacuation. 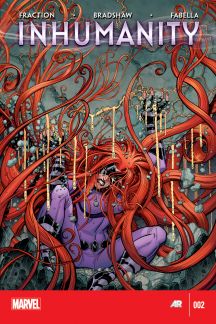 Kicking off an event in and of itself that included a variety of one-shots, limited series’ and tie-ins, Inhumanity also lead directly into a new series called INHUMAN by Charles Soule, Joe Madureira, Ryan Stegman, Pepe Larraz and Andre Araujo.

As it turned out, the response to and from the newly created Unhumans proved as diverse as the individuals themselves. Some, like Inferno, joined up with Medusa and her people while others followed the maniacal Lash. Still others tried to avenge themselves against the Royal Family for turning them into unusual creatures.

Over the course of the 14 issue series and the end-cap annual, INHUMAN presented a number of problems for its stars to deal with ranging from Inferno’s pregnant sister giving birth and New Attilan’s acceptance as a sovereign nation floating right off of Manhattan to The Unspoken’s attempted overthrow and Medusa’s heel turn during the Axis storyline.

However, the series came to its proper conclusion after all of the various characters made their way to New Attilan – including Reader, Iso and even Ms. Marvel – and fought like mad to keep another Nuhuman, Lineage, from usurping the throne himself. He came very close and might have even succeeded had a presumed dead Inhuman Royal not made a triumphant and very well timed return to save the day.

Like every other series at the time, INHUMAN came to an end with the gigantic Secret Wars event. Black Bolt, and even Maximus, had been working with the Avengers to stop the reality-shaking incursions, but that didn’t help much. Black Bolt died as the Ultimate Universe crashed into the 616, just before almost everything ended and God Doom reshaped existence with Doctor Strange at his side. After the heroes returned reality to its relatively normal status, the Inhumans returned themselves with a line of books including ALL-NEW INHUMANS, UNCANNY INHUMANS and KARNAK!

During Secret Wars, many realities all came together in the form of Doom’s Battleworld. INHUMANS: ATTILAN RISING chronicled the adventures of Black Bolt and Medusa as they worked in direct opposition to one another! She continued leading New Attilan in Manhattan while he ran the Quiet Room – the same place Peter Quill sang at in STAR-LORD AND KITTY PRYDE – as well as the secret resistance group, The Unheard Voice. Meanwhile, another Medusa flexed her follicles along with a group of fellow rad women in the pages of A-FORCE, even proving her devotion for her team by sacrificing her own life to keep the rest of them safe.

Earn Points, Get RewardsJoin NOW!
In this article: Black Bolt

Madness Is Unleashed on Marvel Heroes in 'Darkhold: Wasp' and 'Darkhold: Black Bolt'

Writers Jordie Bellaire and Mark Russell team up with artists Claire Roe and David Cutler to bring you thrilling new chapters in the Darkhold saga this November!