After discovering their king is a Skrull impostor, the Inhumans take to the stars!

For some, space might represent a place of limitless wonder and opportunity, but not for the Inhumans. The species felt two major setbacks coming from the stars in 2007’s WORLD WAR HULK #1, the Green King proved his strength and rage by easily beating the Inhuman one unconscious and using his limp body as proof of his might. The next year’s ILLUMINATI #5 revealed that Black Bolt himself had been replaced by a Super Skrull. Namor killed the interloper and Iron Man delivered the body to Medusa in SECRET INVASION: INHUMANS by Joe Pokaski and Tom Raney. 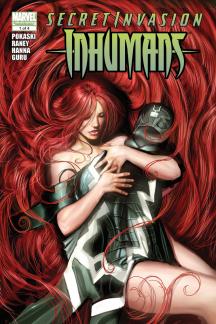 That series continued by showing the Inhumans trying to deal with the revelation that their king had been replaced while a Skrull scientist experimented on Blackagar. While Attilan defended itself against an invasion of Super Skrulls, the Royal Family headed out to get their true leader back. Medusa turned to Ronan and the Kree for help, he agreed as long as Crystal married him.

Eventually reunited, the Royal Family returned to Attilan where they made peace with Maximus and announced the Kree alliance. In SECRET INVASION: WAR OF KINGS, one event gave way to another as the Inhumans took to space in Attilan itself, now a city-ship powered by Black Bolt’s voice. 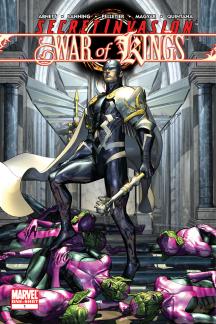 Seeing as how the Kree played with Earth genes to create the initial wave of Inhumans, the current group saw that their evolutionary prowess actually put them above the blue-skinned space cases. In other words, the Inhumans called dibs on leading the Kree Empire!

In the WAR OF KINGS six issue series, the Inhumans found themselves thrust into intergalactic politics and all the fighting that came with it thanks to a conflict with the Shi’Ar and their maniacal leader Vulcan.

The war itself ended when Black Bolt attempted to create an equal genetic foundation by releasing the Terrigen Mists into the cosmos. Instead, Vulcan showed up to kill the king. While Crystal and Lockjaw escaped, giving the former time to suppress the mist’s release, but not the massive explosion which seemingly killed Black Bolt after he blasted Vulcan with a “No.”

The Inhumans’ cosmic adventures continued in the Realm of Kings event which found various space heroes trying to stop the Cancerverse’s incursion on reality. In REALM OF KINGS: INHUMANS, Medusa carried on where her husband left off as both the leader of her people as well as the Shi’Ar. 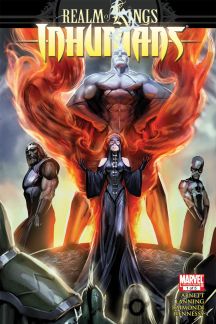 An attack from Devos the Devastator happened to bring the Mighty Avengers back to the Inhumans, including Silent War instigator Quicksilver. He claimed that a Skrull actually committed the acts, but lied. Still, he returned the missing crystals as an act of good faith.

After THE THANOS IMPERATIVE, a far more important return took place in FF #6 when Black Bolt made a triumphant one thanks to Jonathan Hickman and Greg Tocchini. He awoke in The Fault where Lockjaw appeared to bring him back to his people. The Inhumans then responded to a summons, gave Kree control back to Ronan and returned to Earth where Black Bolt found himself a husband four more times over! For even more Hickman Inhuman action, come back next time! 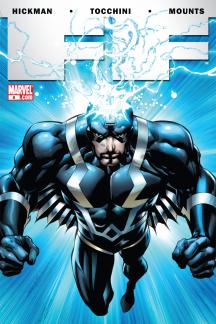 Wondering when exactly the Skrulls nabbed Black Bolt and replaced him with one of their own? As explained in SECRET INVASION: INHUMANS #3, they got him after Secret War when Blackagar Boltagon snuck out for one of his Illuminati meetings. They feared that the replacement’s defeat at the hands of Hulk would result in the humans uncovering the invasion plot, but Medusa swung in to nurse her presumed husband back to health.

Jonathan Hickman take the Inhumans – and the rest of the Marvel Universe – to Infinity and beyond!