Whenever the Inhumans find themselves in The City That Never Sleeps, they just can’t seem to keep themselves out of trouble.

And on November 1, writer Christopher Priest and artist Phil Noto unleash the gang on NYC once again in INHUMANS: ONCE AND FUTURE KINGS #4!

The Royals hit the streets—and battle Spider-Man—in a wild tale that weaves in The Wizard, The Seeker, and all the local dangers of the city. With the wrath of Attilan on their tail, how will the Inhumans respond?

We caught up with Priest to find out.

Marvel.com: Tell us a little bit about the events leading up to this story…

Christopher Priest: This storyline has been based on a series of misunderstandings and misinterpretations of observed actions. The young Royals believe the King (whose name is now Unspoken) intends to kill them. He does not. Medusa believes the King wants to force her into marrying him. He does not. Some of these misunderstandings relate to their biases—for example, an Alpha Primitive develops his inaccurate assumptions as a result of the Inhumans’ caste system and how his people have been oppressed for generations.

But with all of that going on, it comes as no surprise when, at the climax of issue #3, a young Black Bolt mistakes a Friendly Neighborhood Spider-Man for one of the King’s agents and presumes the Alpha Primitive’s incorrect assumption—that the King wants to kill them—to be correct. 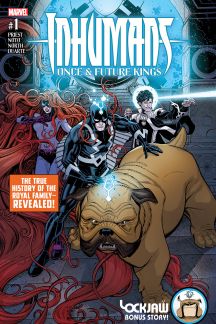 Marvel.com: How did it feel to write Spider-Man again? You two have a bit of history!

Christopher Priest: I began my career way back in the 1900s as the Spider-Man Editor at Marvel—and later went on to write the character in a couple of series. My bigger struggle here became keeping him from sounding too much like Deadpool, whom I have also written! (Of course, Deadpool’s speech pattern is largely derivative of Spider-Man’s, so it could be a little tough.)

Marvel.com: Did it prove difficult to imagine these characters so far back in their own personal histories? How do the Royals differ here from how we see them as adults?

Christopher Priest: Well, I want to be careful because I have so much admiration and respect for the writers handling the current series. I personally have always thought the Inhumans have been handled with just a bit too much reverence—a bit stiff, taken too seriously—and that the characters became too far removed from what Stan Lee called “The World Outside My Window.” I’ve had similar problems with Asgard and Wakanda! These can be great places to explore, but in terms of my personal interest, I prefer my super heroes grounded in as much reality as we can muster—so that the fantastic elements “pop” from the world we actually know.

I thought, and Marvel agreed, that their adolescent selves might be a lot more flexible and knowable, with universal conflicts and coming-of-age stories present. That’s the big difference between Teenhumans and the current-day version: we allow ourselves to treat the characters a little less like glass and drop much of the formality. They’re kids. They look like kids, they act like kids, they make mistakes the way kids do. We have copious amounts of humor and warmth, which can be much harder to do with the, at times, way-too-serious adult versions of these characters. 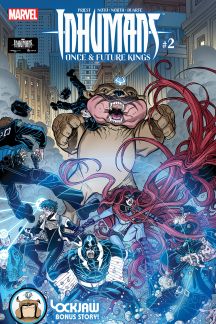 Marvel.com: How does this origin story stand as unique from others that have been told?

Christopher Priest: We’re just kind of filling in the blanks and, at times, walking in-between known events of the early Marvel Universe. Some outright changes needed to be made only because of the inevitable knots in Marvel continuity over the years. I also believe that a lot of the origin stuff—specifically as presented in back-up stories or one-off features—emerged without a lot of consideration for “canon,” or the big picture.

In those days, Stan, Roy Thomas, and others just winged it. Now we have to be accountable to decisions made on the fly 40 years ago and somehow make it all fit! We tried hard to respect that work, but, inevitably, some choices had to be made.

Marvel.com: Tell us about Bentley Wittman, A.K.A. The Wizard. What has his presence done to the dynamic of the group?

Christopher Priest: Well, as most every fan knows, Medusa ultimately joins Wittman’s Frightful Four villains group—which could be the subject of a sequel if this series finds an audience… I thought engaging The Wizard without ever actually calling him that felt consistent with Marvel’s cinematic and Netflix universe approaches—and I think it works really well here; playing off of things the audience already knows about that character and history. The fact that one of the first humans the young Royals encounter turns out to be a menace adds to the Inhumans versus humans paranoia we see later on. 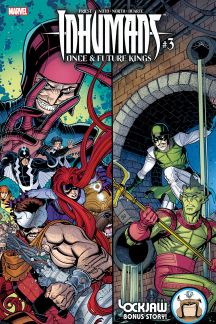 Marvel.com: Phil Noto—what a wonderful artist. How does his distinct style add to the tone of the story you set out to tell? By the way, aren’t you an artist yourself?

Christopher Priest: Nah, I’m a pretty good visual storyteller but way too lazy to draw my own thumbnail layouts the way Keith Giffen does. Inker Josef Rubinstein advised me kindly to stick to writing—I believe “you suck” were the words.

Phil Noto, on the other hand, is a revolutionary artist; a kinder, gentler Moebius. His work here presents a clear break from the typical Marvel house style, which may require some small adjustment from readers expecting Jim Lee-style dynamics. Noto’s stuff looks more like fine art—which it absolutely is; it feels very grounded in reality. Every page has been unexpected but wonderful—he delivers exactly what I asked for but not what I expected. His storytelling lands on-point and he breathes an amazing humanity into his characters’ expressions, drilling right into their eyes. I could not be more thrilled by this choice of artist and eagerly look forward to another project we can tackle together.

Marvel.com: How do you manage the stakes of a prequel story? Considering readers might already know the characters’ future.

Christopher Priest: Well, there’s more to personal conflict than life and death, and even knowing the end of the story doesn’t prevent the piece from being suspenseful. In the case of ONCE AND FUTURE KINGS, it has always been all about the journey—a fresh look at these characters and their history, while unearthing new conflicts and new possibilities along the way.

It’s been great fun—way more than I ever could have expected! And I believe there remains a lot more to say with these characters set in this exciting time of their lives.

INHUMANS: ONCE AND FUTURE KINGS #4, by Christopher Priest and artist Phil Noto, heads to the Big Apple on November 1!