Stan Lee and Jack Kirby team-up to tell a Hulk story for the ages! 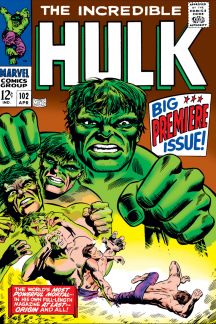 Though he drew covers for the Hulk’s monthly return, Jack Kirby wouldn’t start penciling interior adventures until issue #68, when he reintroduced The Leader. At the time, Bruce Banner had been branded a potential Communist for seeming to help The Hulk—whom the government had a great suspicion in. Banner even appeared to die by a gunshot wound at the end of issue #69!

In TALES TO ASTONISH #70, the U.S. Army investigated the Leader’s lab in search of The Hulk—before concluding that the Jade Giant had escaped and that Banner’s body went missing. Turns out, Banner’s old friend Rick Jones previously snuck into the lab, stole the body and drove it to one of Bruce’s own laboratories—where he hoped to revive The Hulk, and with him, Bruce!

Rick succeeded in reviving them, but inadvertently brought Bruce’s consciousness back in the Hulk’s body. Banner quickly realized that, if he changed back into his human form, the bullet lodged in his brain would kill him instantly. To stave off such an event, Dr. Banner needed to stay in his Hulk form as long as possible.

The Leader, meanwhile, unleashed a 500-foot-tall Humanoid to take on all comers. In response, The Hulk and the army formed a temporary truce to deal with the new, more urgent menace. The Leader’s invention, however, proved powerful enough to withstand the onslaught—until issue #71. 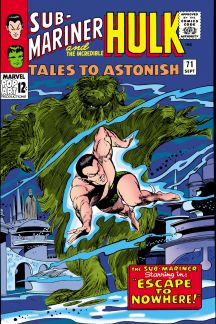 In that book, General Ross launched a missile called “the Sunday Puncher” at—and seemed to destroy—the Humanoid. In response to the attack, The Leader commanded his creation to immolate itself, so that the military had nothing to study. And The Hulk remained in his Banner-controlled state until he found a solution and turned back into his human form.