Carlos Pacheco provides a look back at a classic Kirby character intro!

When it came to tackling big ideas, Jack Kirby never shied away. He created comics that dealt with everything from Nazis and racism to the origins of reality and how the divine interact with man. CABLE artist Carlos Pacheco has always appreciated the way “The King” explored these concepts.

“For my favorite Marvel Kirby issues, I’m afraid that I won’t be very original saying that the issues that go from FANTASTIC FOUR #44 [to] #67 contain what Marvel comics always was: a creative explosion,” shares Pacheco. “Inhumans, Black Panther, Galactus, Silver Surfer and Doctor Doom, the Negative Zone, Him, and the Hive. What [writer] Stan [Lee] and Jack did in those is impossible to repeat. Anyway I’m very fond of the last two issues, #66 and #67”

In FANTASTIC FOUR #66 and #67, from 1967, Alicia Masters disappears and her boyfriend, the ever-loving, blue-eyed Thing, wants to find her, while his teammates think she might have simply left without saying anything. In reality, she’d been taken to the Citadel of Science where the lab’s members had created a supposedly perfect human with the power to blind anyone who came near. They planned on sending Masters to their creation so she could sculpt “HIM” and give them an idea of what they’d made. 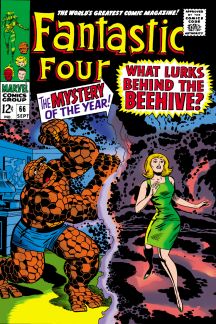 “Kirby mythology goes beyond men and supermen, he established a relationship between men and gods—and demons,” Pacheco explains. “Men play to be gods creating a superior form of life as it happens in those particular FANTASTIC FOUR issues; a being that cannot be understood by human perception and we need a blind woman to understand it, an intermediary between this god and the rest of humans—even the ones that create him—to perceive what is beyond our knowledge. To translate the 4th dimension to elements of the 3D one. I don’t remember the first time that such a secondary character gets so relevant role in a story.”

To that point, Alicia remained nearby when the cocoon containing HIM opened, releasing the wildly powerful individual onto the world. Before zapping the Citadel of Science away, HIM proclaimed, “This planet of humans is not for me—not yet—not till  another millennium has passed!” Eventually the being took on the name Adam Warlock and traveled the spaceways as a messianic figure, spreading his influence across the cosmos.