Explore a wild kingdom only the mind of Kirby could imagine!

Back in the 1960s when Stan Lee and Jack Kirby laid down the base for the Marvel Universe, they created a number of unusual and endlessly captivating nooks and crannies to explore. In 1965’s UNCANNY X-MEN #10, readers discovered a secret place called the Savage Land that played home to dinosaurs, Neanderthals, and other forms of life including the heroic Ka-Zar and his saber-tooth tiger Zabu. Those last two came into the merry mutants’ world by way of a television broadcast showing the “Antarctic Wild Man” saving a researcher wearing only a loin cloth and accompanied by a supposedly extinct cat.

At first thinking he might be a mutant, the X-Men wanted to go check the mystery out. Professor X told them that, had he been a mutant, Cerbro would have spotted him, but then allowed them to go anyway. Upon exploring a recently created crevasse, the team traveled down through an icy tunnel that emptied into a boneyard for huge animals.

From there, the teens saw many of the wonders hidden below the ice in the Savage Land, but also several of the dangers ranging from pterodactyls to primitive warriors riding huge birds and wielding impressive weapons. Those attackers got the drop on the X-Men and made off with Marvel Girl while Ka-Zar made his first appearance alongside faithful companion Zabu! 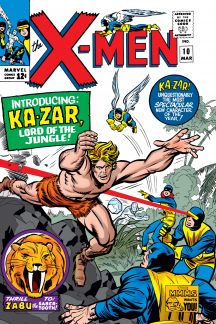 Thanks to some misunderstood differences in customs, the strangers fought one another, but only until Maa-Gor, the Killer, popped up to murder the self-proclaimed “Lord of the Jungle.” With that confrontation over, Ka-Zar agreed to help the X-Men save Jean from the Swamp Men. Angel flew ahead to scout, but got captured himself!

Ka-Zar and company made it to the Swamp Men’s walled village just in time to help Angel and Marvel Girl fend off an attacking T-Rex, thanks in part to the small army of mastodons the jungle lord called in for reinforcements. Upon freeing the captives, Ka-Zar bid the X-Men farewell, explaining concisely that he preferred his world to the one above.

Kirby returned to the Savage Land and Ka-Zar along with Lee for the first issue of ASTONISHING TALES in 1970. The character had appeared in various places in the five years since his creation, but this marked his first real showcase, though he had to share it with the villainous Doctor Doom! With the second issue, Roy Thomas took over for Lee on the scripts. Kirby only lasted one more issue himself before making way for artists like Barry Windsor-Smith, Herb Trimpe, Gil Kane, John Buscema, and Marie Severin.