After seven years of super-heroics, exploring, and witnessing many a previously unseen wonder, Marvel’s First Family experience something brand new with FANTASTIC FOUR ANNUAL #6 in 1968: kids! Stan Lee and Jack Kirby seeded the story the year before in the pages of FANTASTIC FOUR ANNUAL #5 when Reed and Sue learned of her pregnancy.

This issue began with Johnny and Ben barging into Reed’s lab, wondering why he continued working on experiments instead of standing next to Sue in the delivery room. Richards explained that the cosmic radiation that turned them into the FF remained in Sue’s body and could have an adverse effect on the baby. He further exposited that an anti-matter element in the Negative Zone could help save mother and child and wanted to get it on his own. Of course, his two teammates refused to let him fly solo and backed him up. They had no idea that a new threat, one known as Annihilus, had started making life even more dangerous in the Zone!

Kirby showed off his amazing pencil work as he rendered the Negative Zone and then a pair of mindboggling collages to demonstrate just how different this locale looked and felt. Almost immediately, the Zone also proved how dangerous it could be as unseen forces snatched Mr. Fantastic up with a quickness. Soon reunited with his teammates in Annihilus’ jail, Richards and his fellows did their best to survive against giant robot boots, gyro-saws, and sonic sponges. Soon gaining the upper hand, the heroes attacked their captor and made off with his Cosmic Control Rod. 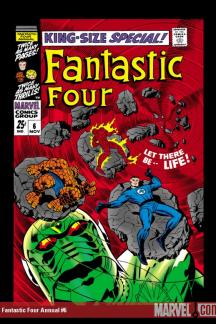 Incensed at the effrontery, Annihilus sent monsters after the male FF members who had also stolen his Rail Plane to make their escape. Reed realized he could use some of the Rod’s powers to knock the beasts back, but the trio soon stood stranded in space. After another battle with their new foe, Reed made a deal with the bad guy to trade the Cosmic Rod back in exchange for their Repellor Units, which they used to get back home, but only after Mr. Fantastic siphoned off some of the energy to help Sue and the baby. The gents made it back to the positive world and handed off the energy to help Sue, who had the real hard work to do in giving birth.

Though they spent excruciating time waiting to find out what happened, Reed, Ben and Johnny soon heard the good news from Crystal: it’s a boy! The whole family then made their way into the room to meet the baby, who we’d eventually know as Franklin Richards, a kid powerful enough to create an entire reality for his folks and their friends when it seemed like they’d perished at the hands of Onslaught several decades later!