Kirby 100: No One Can Stop The Vanisher

In November of 1963, Jack Kirby’s art featured in eight different comics from Marvel! Hank Pym transitioned from Ant-Man to Giant-Man in TALES TO ASTONISH #49, Molecule Man debuted in FANTASTIC FOUR #20, and the merry mutants faced off against The Vanisher in UNCANNY X-MEN #2! Today we’ll focus on that last one, an issue written by frequent Kirby collaborator Stan Lee. The issue began with Cyclops, Iceman, Angel, Marvel Girl, and Beast splitting up to make their way to Professor X after he mentally called for them.

Once the students gathered before Xavier, their mentor told them that he sensed the presence of an evil mutant called The Vanisher. The telepath then showed them how this new rogue robbed a bank at gunpoint and then teleported away without much fuss. To prepare for this new kind of foe, Professor X sent his students to the Danger Room where they trained. Meanwhile, Vanisher struck again, this time popping into the Pentagon to let the chief of staff know that he would steal the continental defense plans in a few days! After word of his exploits spread, the vanishing villain became a huge figure in the underworld, with hoodlums clamoring to work for him.

Having trained up until the last possible moment, the team lit out from the Xavier mansion to Washington, D.C. to put a stop to the baddie’s brazen operation. They didn’t arrive in time, though, to stop Vanisher from grabbing the plans. The X-Men did show up during the ne’er-do-well’s escape though and started giving him trouble, but the whole thing turned into a super-powered version of keep away as everyone went after the case holding the defense plans. Still, Vanisher wound up making his escape, marring the mutants’ reputation with the public in the process. 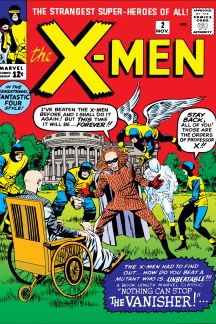 After beating themselves and each other up a bit, Xavier’s students listened as their teacher laid down a new plan of attack to stop Vanisher blackmailing the government out of $10 million in exchange for returning the plans. This lead to a standoff in front of the White House with the X-Men on one side and their opponent on the other, backed by his army of crooks. Professor X then appeared and offered the chance to surrender. The Vanisher scoffed and soon learned the true power of the man he faced as his memories completely fell away, leaving him confused and tired.

The angry mob only felt anger, though, and attacked our heroes, but ultimately stood no chance. Professor X ended the issue with a nice message for everyone: “The greatest power on Earth is the magnificent power we all of us possess…the power of the human brain!”