Swing through Kirby adventures with the friendly neighborhood hero!

Everyone knows that Jack Kirby drew the cover for Spider-Man’s first appearance in AMAZING FANTASY #15, and that another legendary artist—Steve Ditko—handled the interiors. Aside from that issue, however, The King worked his particular brand of Wallcrawler magic alongside Stan Lee!

Kirby returned to the arachnid scene with 1963’s STRANGE TALES ANNUAL #2—a story called “Human Torch on the Trail of the Amazing Spider-Man.” In this book, Johnny got a little annoyed at Spidey after seeing how much attention the Web-Head received for his actions, eventually running off in anger. Meanwhile, The Fox ran afoul of the law—and framed Spider-Man for the crimes committed. Worried that he couldn’t handle everything on his own, Spider-Man headed to the Storm house in Long Island, asking The Human Torch for a hand. Johnny, still upset, responded with a barrage of fireballs. 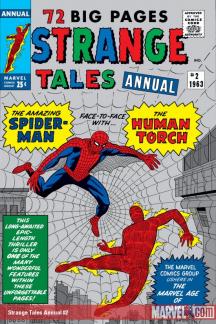 After a long battle, Spidey webbed up the Torch, allowing him a moment to explain the situation. Initially disbelieving, Johnny saw the truth and joined the cause. Finally working together, the duo planned on taking The Fox down—and saw their plan come to fruition soon after.

The next year, Kirby created a back-up story in AMAZING SPIDER-MAN #8 called “Spider-Man Tackles The Human Torch.” In this tale, ol’ Web-Head met up with Johnny’s girlfriend, Doris Evans, at a party—in an attempt to sweet talk her into a date. Johnny arrived at the scene, however, and the meetup became a super power head-to-head between the two heroes. Johnny spotlighted a few dancers with his infrared light, Spidey formed a bat out of webs and tossed it over the revelers, causing a bit of hysteria. 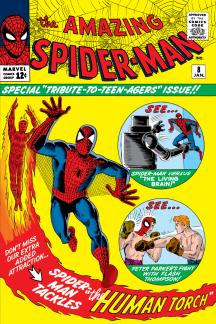 This move, obviously, didn’t go over too well, with the guests requesting that the Torch remove the unwanted visitor. And the ensuing confrontation proved to be a bit more violent. During the fracas, Johnny ran into the Fantastic Four, leading Spider-Man to attack them as well. Before long, though, Sue Storm calmed the situation and the Wallcrawler swung into the night.

The rivalry between these two continued for years—though, eventually, they’d become close friends. But these early stories show an ultra-unique dynamic between two good guys who just have different ways of doing things. All thanks to Steve, Jack, and Stan!