Namor and Hulk team up to take on Earth’s Mightiest Heroes!

Never let it be said that Hulk doesn’t have feelings. In fact, a strong sense of betrayal led him to leave the Avengers not long after they formed. He helped found the team along with Thor, Iron Man, Ant-Man, and Wasp in the first issue of AVENGERS, but then left at the end of the second after the team battled Space Phantom, who had the ability to take someone’s physical form. After assuming the Jade Giant’s identity, the Phantom fought the heroes who didn’t exactly have nice things to say about Bruce Banner’s alter ego, some of which came out even after Hulk regained his place in this reality.

As AVENGERS #3 by Jack Kirby and Stan Lee began, the team discussed finding The Hulk during their monthly meeting. Iron Man—in his sleeker red and gold armor for the first time in this book—projected himself to the likes of the X-Men, Fantastic Four, and even Spider-Man to see if they’d help track the man-monster down to no avail. However, Earth’s Mightiest Heroes did get help from Rick Jones and the Teen Brigade. Rick tried getting Hulk to turn back into Bruce and lie low for a while, but the procedure didn’t take and Hulk returned to his rampaging ways. Jones called out for help and the Avengers answered!

The heroes, however, didn’t quite have the upper hand. Hulk knew their desert battleground far better than anyone and used that knowledge to fight his attackers, hop a train, and make a thrilling escape. Unbeknownst to all the players, they had a secret audience watching all of this: Namor, the Sub-Mariner! He planned to put himself in the one place that Hulk would wind up and then convince him that they should both embrace their hatred of humanity and attack the surface world. Hulk agreed, though he never fully trusted his new partner. They then faced off against the Avengers in tunnels under Gibraltar, which housed abandoned weaponry from World War II. The daring duo used these destruction dealers as part of their attack on our favorite Assemblers. 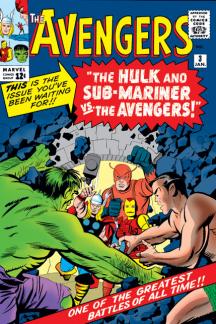 The ensuing battle of epic proportions featured the pair essentially turning Iron Man into a statue, a sonic blast knocking Wasp out of the air, and both Hulk and Namor attempting to rip Mjolnir out of Thor’s hands! Though that endeavor failed, the two mighty misanthropes neared victory up until the moment when stress caused Hulk to return to his Bruce Banner form. At this point, he had kept his dual identity a secret, so the scientist made a break for it while no one watched.

Alone, Namor soon fell to the Avengers, partially because of their strength but also because his powers lessened the longer he moved outside of the water. Thanks to some H2O trickling in, The Sub-Mariner gained just enough juice to make his own escape. In the next issue, he’d have the most important tantrum in all of comics history, accidentally freeing Captain America from his icy prison.

This issue from 1964 went a long way to continue building the Marvel Universe that we all know and love. From the heroes communicating with one another in the beginning to the continued storylines and, of course, the epic villain team-up, Kirby and Lee worked hard on these stories to lay groundwork that’s still being used to this day.