Kirby 100: The Coming of Galactus

Join us this month to celebrate Jack “King” Kirby’s 100th birthday by learning about the characters and stories he created to change comics forever. To commemorate Jack’s centennial, we’ve sat down with the modern-day creators he influenced—and the decades of work he gifted us all.

No one came up with better, more long-lasting villains than Jack Kirby and Stan Lee. Their FANTASTIC FOUR run alone brought some of the Marvel Universe’s biggest baddies into existence—ranging from Monstro and the Skrulls to Doctor Doom and Galactus!

“If anyone is going to surpass ‘The King’ as far as creating characters, he or she hasn’t been born yet,” notes MOON GIRL AND DEVIL DINOSAUR writer Brandon Montclare. “Or at least hasn’t started their careers, as no working creator can extrapolate that kind of output!”

For Montclare, the Devourer of Worlds, Galactus, holds a great deal of significance, thanks in part to the difficulty he had getting his hands on the story that ran in FANTASTIC FOUR #48–50 from 1966.

“FANTASTIC FOUR #48 was mythic before I ever got to read it,” Montclare describes. “Silver Surfer was my favorite character growing up. Even before I read those [issues of] FANTASTIC FOUR, he had a mystique of being a different and special character. The cosmic force Galactus was equally so! I’m envious of older fans who experienced that on the newsstand. But I couldn’t afford a FANTASTIC FOUR #48! And I recall there actually being FANTASY MASTERPIECES reprints only of the John Buscema stuff, but even those were older and hard to find!”

The first issue in the trilogy tied up an Inhumans thread running in a prior storyline. The Watcher then appeared to warn Reed Richards and his team of an upcoming threat posed, first by the mysterious Silver Surfer, and then by Galactus himself! 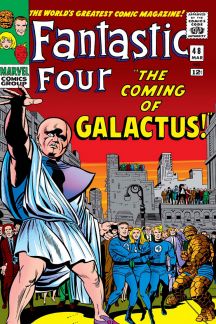 Face-to-face with the world-eater, the quartet jumped into the fight, though as Ben Grimm described their initial futile efforts in issue #49, “He didn’t even feel it!” But thanks to the group’s persistence—as well as a change in allegiance by the Silver Surfer and the looming threat of the Ultimate Nullifier—Galactus decided the planet not worth his trouble and left, exiling Norrin Radd to Earth in the process.

“Reading all of the Stan and Jack FANTASTIC FOUR comics, when I finally got around to it, was an eye-opener,” Montclare recalls. “I don’t think anyone has come close to doing what they did on FANTASTIC FOUR. I think there’s indeed a ton of great Fantastic Four comics, but they were squarely super hero and very ‘Marvel Universe’ by the time I knew them. The early Fantastic Four, despite the crossovers and recurring characters, always feels like an exploration story.”

FANTASTIC FOUR #48-50 served to continue the establishment of the cosmic side of the Marvel Universe. While readers had already met the Skrulls, the alien race made another appearance in this tale, doing their best to avoid a visit from Galactus. Future writers would take inspiration from these early galactic insights to help build what now stands as an all-important aspect of the universe.

“I love Marvel Cosmic,” Montclare explains, “As a kid, I started in a decade past [writer and artist] Jim Starlin, so two decades past Kirby. But seeing those stories, you really can feel that the whole cosmic branch of Marvel started in that book—and really just with Jack’s visuals. From the outlandish designs to posed grandeur to even the classic Kirby Krackle.”