The Fantastic Four take on a fiendish foe in Transylvania!

If there’s a better way to celebrate Halloween than by traveling to Transylvania with Marvel’s First Family, we don;t know it! That’s the basis behind 1964’s FANTASTIC FOUR #30 by Stan Lee and Jack Kirby! In true FF fashion, the trip acted as a mix of business and pleasure for the team. The vacation began with Reed, Sue, Johnny, and Ben wandering through a forest that, according to Mr. Fantastic, seemed like it intended to trap them within.

Just as the group reached a clearing with an old, decrepit castle, a group of villagers appeared behind them, warning the heroes not to enter for fear of upsetting Diablo. Led by Mayor Baron Hugo, the party brought the FF back to town where he explained the legend of Diablo to them. A hundred years ago, the villagers had had enough of Diablo’s evil alchemy and sealed him up in the castle itself. While some thought he must surely be dead after a century, others believed the villain had figured out a way to extend his lifespan. 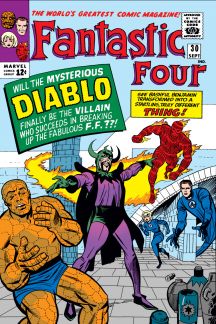 That night, Ben found himself roused from sleep by a melodious voice that seemed to put him in a trance. It called him to Diablo’s castle and he answered, using his strength to open a massive crypt and free his new master! The next morning, the rest of the Fantastic Four followed Thing’s trail and found him changed. He agreed to work for Diablo for a year in exchange for a new form that left him still orange, but more human in appearance. If Ben followed through, Diablo would give him the rest of the serum to turn him fully human again.

Grimm sided with the newly released prisoner over his longtime friends, even getting into a fight with his allies! Reed, Sue, and Johnny decided to leave Thing to his new life, but kept an eye on him. So did the rest of the world as Diablo started selling immortality chemicals. At around the same time, Reed discovered that Diablo’s chemicals truly caused more harm than good and Ben realized that he’d been tricked! The rest of the FF didn’t waste any time before attacking Diablo’s castle. He had amassed a small army to help defend his lair, but they couldn’t stand up against the heroes, especially Ben rejoined his teammates!

In the end, Ben Grimm may have turned back into The Thing, but he never would have been able to re-entomb Diablo without the strength and durability that came with that form! In other words, Kirby and Lee offer a spooky story with a nice message about being who you are on this Halloween day!