The story of Jack Kirby and Stan Lee’s early days with the Jade Giant!

Join us this month to celebrate Jack “King” Kirby’s 100th birthday by learning about the characters and stories he created to change comics forever. To commemorate Jack’s centennial, we’ve sat down with the modern-day creators he influenced—and the decades of work he gifted us all.

Jack Kirby was one of the primary architects of the Marvel Universe, and his list of contributions to comics is long enough to span even our galaxy. And one of the crown jewels of his work was his collaboration with Stan Lee to craft one of the most complex Marvel characters in existence: The Hulk.

In 1962, Jack and Stan launched a character that seemed in line with the early monsters of TALES TO ASTONISH and the pre-Thor JOURNEY INTO MYSTERY, though this new creation turned out to be so much more. This introduction saw brilliant scientist Bruce Banner transform into a comic book legend when he threw caution to the wind and ran onto an active gamma bomb test site to save a wayward young man named Rick Jones.

INCREDIBLE HULK #1 featured Dr. Banner under pressure from military leader Thunderbolt Ross, who wanted to hurry a gamma bomb into its trial period. Meanwhile, Banner’s fellow scientist Igor pressed the Doctor on the secrets behind the G-bomb’s creation. Fueled by these tensions—and a bit of his own hubris—Banner agreed to an early test. 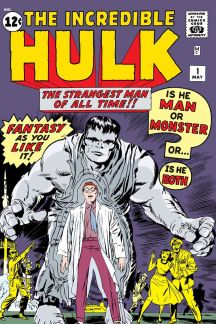 Though on the day, as the bomb was being prepared for launch, Rick Jones—a local teenager—unknowingly drove his car toward the target zone. Banner, having spotted Jones, requested that Igor hold the operation so that the young man could be removed from danger. Ignoring the Doctor’s plea, Igor went ahead with the experiment as planned.

Banner managed to reach Jones before detonation, throwing the young man into a ditch for safety. Banner himself, however, got caught in the blast. He survived, though he and Jones were placed in a makeshift jail cell for breaching military regulations. Hours later, the ticking sound of a Geiger counter triggered something within the Doctor and, bursting from his human form, Banner morphed into a gray goliath known as The Hulk. Exploding from their chamber, The Hulk and Jones escaped. Turns out, the gamma rays had quite a lasting effect.

By the next issue, Bruce Banner began turning green during his now-regular transformation—and an icon was born. The Hulk faced off against the alien Toad Men, Russian spies, The Ringmaster, Mongu, Tyrannus, and other foes not quite fit to fight one of the strongest Marvel characters around.

Though this initial series only lasted six issues—with Kirby drawing the first five and Steve Ditko handling the last—the Jade Giant leapt around the Universe, appearing in FANTASTIC FOUR and becoming a founding Avenger before finding a new home in TALES TO ASTONISH. The Hulk went on to anchor the title for over 60 stories, with Kirby returning to pencil issues #68-87.

Bruce Banner and The Hulk have continued on with decades of adventures, trials, and tribulations since, but all of his stories look back to the beginning—the character and concept established by Jack Kirby and Stan Lee.

Hulk Smashes His Way Onto the Fortnite Item Shop

Hulk is now rampaging across the Fortnite Item Shop with his Gamma Chamber Back Bling, Demolisher Pickaxe, and more!