Kirby 100: The Monster from the Lost Lagoon

A Fantastic family vacation turns into a wet and wild adventure!

In their time working together, Stan Lee and Jack Kirby conveyed many lessons to their readers, but one of the primaries included “things aren’t always what they seem.” The duo worked that theme in 1970’s FANTASTIC FOUR #97 on a variety of levels.

First and foremost, what seemed like a simple vacation for the First Family of Marvel turned into a monster hunt as Reed drove Ben and Johnny around in a borrowed Air-Sea Cruiser in an effort to find out what caused a series of sunken ships in Lost Lagoon. Seeing a humanoid shape in the water, the erstwhile Mister Fantastic thought they figured out part of the problem, but an enormous whale interrupted their search. Fed up, The Human Torch flew back to the nearby beach where Sue actually enjoyed their vacation with young Franklin.

As the teammates met up to try and just enjoy themselves, the action cut away to an undersea cave where the creature revealed itself as a green water-breather who could use some kind of agent to transform himself to look more human. He then swam up to the surface world where he worked a dolphin show at an oceanarium. The fish-man recognized Reed, Johnny and Ben from earlier that day and wondered if they did the same with him as he performed his act. Still driven to figure out the problem at hand, Richards asked the swimmer to help guide them underwater to find the party responsible for the downed ships. 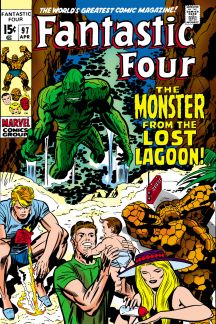 They seemed to work well together—even though the newcomer didn’t actually speak—until the would-be guide punched his way through the ship’s hull and swam off. The Thing managed to get his friends into another underwater cavern filled with air where they came face to face with their transformed foe for the first time! Though the creature proved strong enough to take Ben on in a fistfight, he made a break for it as soon as the Torch shot off some of his own brand of fireworks.

Moving further into the cavern, our heroes discovered the truth of the matter as they came upon the creature loading water balls onto some kind of spaceship! Reed explained that the alien must have landed on Earth and needed to stock up on H20, taking out any nearby ships just to keep him and his partner safe. Having fulfilled its immediate mission, the extraterrestrial motioned for the adventurers to back away as he entered the ship and blasted off for home! With that, the Fantastic Four could get back to their relaxation time and enjoy some fun in the sun.