Ben Grimm struggles with his role in this Lee-Kirby classic!

Join us this month to celebrate Jack ” King” Kirby’s 100th birthday by learning about the characters and stories he created to change comics forever. To commemorate Jack’s centennial, we’ve sat down with the modern-day creators he influenced—and the decades of work he gifted us all.

Jack Kirby worked nonstop on FANTASTIC FOUR from its launch in 1961 all the way through 1970’s #102. During that time, he and Stan Lee created some of the most memorable characters in the Marvel Universe, ranging from the First Family of Comics themselves to Galactus, Silver Surfer, Doctor Doom, and beyond!

One of the most beloved stories in that run came right in the middle with FANTASTIC FOUR #51, a tale known as “This Man… This Monster.” And that particular issue happens to be a favorite of HOWLING COMMANDOS OF S.H.I.E.L.D. artist Brent Schoonover—so we sat down to discuss it with him!

“I was lucky to get a pretty beat up copy [of FANTASTIC FOUR #51] for cheap at a comic convention when I was a kid,” he explains. “I was all about getting old comics as cheap as I could on my allowance growing up. That is one of the most iconic stories of all time.”

The tale takes place in the immediate aftermath of the team learning about the Inhumans and then facing off against Galactus. The June 1966 issue kicks off with a striking cover of Sue Storm pleading for help from Ben Grimm as Reed Richards looks trapped in a force field. And—unlike the usual gung-ho hero we’ve all come to know and love—The Thing simply looks down at his hands, seemingly unsure of himself.

“You open it up to this amazing image of Ben Grimm standing in the rain and it just hits you that, while everyone in the FF really seems to love their powers, Ben is the only one who truly came away worse than when he went in on that space shuttle launch,” Schoonover says. “He could have become one of Marvel’s best bad guys, but he always did the right thing.” 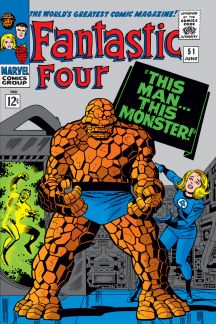 Ben’s first words in the issue come on the next page, in the form of a thought balloon, reading, “I’ll never be human again! I’ll live—and die—just the way I am!” Moments later, a stranger offers him shelter from the storm—and Ben agrees. No simple good Samaritan, this particular person turns out to be a Reed Richards-hating mad scientist who drugs Grimm’s coffee and uses a device to steal his rocky features, leaving Ben in his helpless human form!

A few days later, this impostor tests out his new look by walking right into the Baxter Building and gaining access to one of Reed’s labs. Not long after, the actual Ben barges in, but gets dismissed by Reed and Sue, who refuse to believe he’s actually who he claims to be!

This leaves Reed ready to try his latest experiment, which required Ben’s superhuman strength. In exploration of a way to move faster than the Space-Time Barrier—like The Watcher, Galactus and The Silver Surfer—Reed requires the Thing’s might to keep him tethered to his machine and, if necessary, pull him back if he hits any snags.

Upon arriving at what he first called “the Crossroads of Infinity,” Richards experiences something no one had ever seen before. Here, readers thrilled to one of Kirby’s brilliant collage pieces. “It’s just a wonderful example of how Kirby could take such a human story and add a mighty visual hook to it to keep the reader entertained,” crows Schoonover.

Reed pulls on his tether for help, but the impostor Thing doesn’t respond—until realizing that he’d become more like the hero he’d replaced than he ever intended. Though too late to easily pull Mr. Fantastic back, he grabs another piece of the chord and, rather than saving Reed, finds himself being pulled into the Negative Zone. Though crashing towards utter destruction, Reed tells the fake Ben Grimm that he remains one of the best men he’d ever known and, despite all odds, the fill-in Thing decides to perform a last heroic deed and manages to throw Richards back to safety.

Back on Earth, the real Ben Grimm makes his way to see Alicia Masters, though the scientist’s death in the Negative Zone reinstates the Thing’s original rocky form. Ben Grimm, his super-self once again, returns to the Baxter Building and gets the full story from Reed and Sue.

Stay tuned to Marvel.com for more throughout Kirby Month and beyond! And join the conversation on all of our social channels with the hashtag #Kirby100!