Kirby 100: To Smash the Inhumans

Stan Lee and Jack Kirby worked together to create one of the finest collections of characters ever assembled. Sometimes these creations came from bouncing ideas off of each other before actually working on the comic while others sprouted from different places of origin. Take The Silver Surfer for example. Everyone knows he first appeared ahead of his master Galactus in the pages of the classic FANTASTIC FOUR #48, but the genesis of the character proves an even more interesting story. In his intro to MARVEL MASTERWORKS VOLUME FOUR, Lee remembered how they nailed down the concept of Galactus and then recounted seeing Silver Surfer for the first time.

“After the story had been hammered out, when Jack Kirby delivered the artwork, I noticed some panels featuring a strange-looking guy on a flying surfboard,” Lee wrote. “’Who’s he?’ I asked, not recalling any mention of such a character in our previous discussions. Jack simply said that he felt that anyone as powerful as Galactus should have his own personal herald who searched the skies looking for planets for his master to devour. Well, needless to say, the idea grabbed me. But even more than that, I loved the way the Surfer had been drawn. Something about him looked so pure, so guileless, so noble that I felt I couldn’t let him speak like any other typical comic book character. His personality had to be as special as his demeanor. And so, I decided to let the Silver Surfer become the voice of Marvel’s conscience. He mouthed all the philosophical thoughts and observations that I myself had always harbored and dwelled upon. Within a short time he, more than any other of our creations, came to symbolize all that was good and true about life and the human condition.” 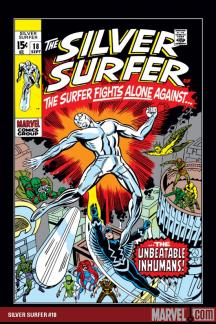 The Surfer kicked around FANTASTIC FOUR for a while after his debut, but earned his own series in 1968 by Lee and artist John Buscema, who would draw every issue of the title except the finale, #18, which saw Kirby return to the character he helped create. The story kicked off with our hero zipping around a series of powered individuals  looking to attack him. Aireo, Stallior, Timberius, and Leonus did so at the behest of their Inhuman leader Maximus the Magnificent—alternately known as the Mad.

Upon returning to their master, the Inhumans heard Maximus’ plan to get the Surfer mad at all of their kind instead of his group specifically. The ploy worked, as Norrid Radd flew to Attilan wondering why its denizens had attacked him. Quickly Black Bolt went to meet the visitor, but Medusa and Karnak set upon him as an intruder and knocked him unconscious! Waking up, Surfer lashed out against his captors. At that same time, Maximus attacked his brother’s people, sending Attilan into a panic. After wrestling his board away from Lockjaw, Silver Surfer flew off only to be attacked by more Inhumans.

Sick of the battle in every way, The Silver Surfer zoomed out of there to get some quiet and think. Instead of cooling off, though, he found himself overtaken by his anger. All this time of playing conscience to a world that didn’t seem to want him had taken its toll and he swore to be “the deadliest one of all!” However, with the cancellation of the book after this issue, readers never quite got to see that version of the character. Still, it would have been wild to see a Jack Kirby-drawn series with the man formerly known as Norrin Radd going crazy on the Earth!