It takes a lot to be a top tie super villain: a cool name, a great gimmick, a flashy costume, and the skill to hang with a hero in combat. Essentially, everything the Tinkerer has never had. Nonetheless, one Chip Zdarsky still believed in the gentleman and with that belief Tinkerer has blossomed into a real threat in the pages of PETER PARKER :THE SPECTACULAR SPIDER-MAN.

On January 17, his threat really explodes in PETER PARKER :THE SPECTACULAR SPIDER-MAN #299, as the Tinkerer brings on a cadre of super villain types to take the fight right to the Webslinger. Chip Zdarsky let us into his workshop despite us not knowing the password to give us the nuts and bolts on Tinkerer’s revamp.

Marvel.com: As a writer, what attracted you creatively to the Tinkerer as a villain for Spider-Man?

Chip Zdarsky: I liked the idea of a villain whose real superpower is knowledge. Tinkerer’s been aiding villains for so long that he’s privy to a lot of secrets, both personal and technical. Also, there’s a real focus these days on tech being the calling of the young, so it’s fun to explore somebody who’s been around a long time dealing with the questions raised by technology.

Marvel.com: What was challenging and rewarding about subtly updating Tinkerer to make him a bigger threat to Spidey than he had been in some time? What was the key, for you, to making that happen?

Chip Zdarsky: Just really recognizing the breadth of his intelligence. If you’re working on the level Tinkerer is, you’re going to have a proper plan, so I worked a lot on that part of things—his goals and how to achieve them.

Marvel.com: As you know a lot of perception of a villain can come from how they are portrayed in the art. How did your collaborator Adam Kubert’s approach to Tinkerer help the book further realize the goal of making him a bigger threat to Spider-Man?

Chip Zdarsky: Ha! By making him smaller! I wanted to make sure Tinkerer was portrayed small and old, to contrast the enormity of his inventions, which I knew Adam would go to town on.

Also, to provide a stark physical difference with his brother, Hophni. Adam went and gave him a real Andre the Giant look, which I love! 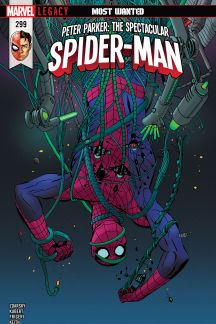 Marvel.com: For a character like Spider-Man who has so many villains and often sees them fit into patterns, how has this encounter with Tinkerer changed his perception of the criminal? What has proven most challenging for the Wallcrawler about adapting to Tinkerer this time?

Chip Zdarsky: I think the planning. They’ve had some run-ins over the years, but Tinkerer’s never planned anything is big and final as this before. His outlook has changed and that’s throwing Spidey for a loop.

Marvel.com: Can you offer any hints on who Tinkerer is tapping in #299 to aid him in his assault on Spider-Man and the Mason?

Chip Zdarsky: He’s helped a LOT of bad guys over the years, so we have villains like Vulture, Whiplash and Beetle showing up, amped-up for a massive battle. Technically there’s six big bads banding together, but I couldn’t figure out a good name for them.

Sinful Six? Six Bad Guys? In any case, they’re more than Spidey can handle on his own.