Windu tries to prepare himself and his fellow Jedi for battle.

Mace Windu is an adult human male who appears to be in above average physical health, a perception confirmed by his medical records. Despite his files reflecting an age that is slightly advanced for his species, there is no record of any age related reduction in physical ability. Additionally, the client reports feeling healthy and has no complaints related to pain. Scans seem to confirm these self-reports.

Windu made the decision to consult with this writer on the eve of undertaking what he would only refer to as “a mission” during the course of our session. I was able to gather that involved leading a small group of Jedi and that it may involve violence but nothing more. However, this therapist does feel this context was enough to explore the situation with the client in a full and useful manner.

Given the client’s religious beliefs and lifelong dedication to being a follower of the Force, he confessed he was struggling with the taking up of arms that he was preparing for. While allowing that he has been trained to use his lightsaber and aspects of the Force in combat situations, he explained that the training had always been oriented around the idea of violence being a last resort. It is meant to be use in reaction, never preemptive action, and to protect the lives of others and the ideals of the Jedi. Jedi are actively discouraged to meet the actions of others with strength unless all other avenues have been explored. 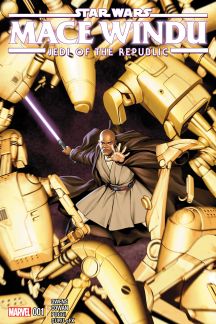 And yet, Windu explained to this writer, given his reading of the Force and the readings of other Jedi whom he has great faith in, it seems that if the Jedi do not act at this time they will be eliminated. He struggled to articulate this idea to this writer, a problem no doubt further complicated by the writer’s own lack of faith in the ancient religion, but eventually managed to make the argument that given what the Force is “telling” him, the mission is an act of reaction, not a preemptive attack.

However, he continues to feel conflicted about this and, more pressingly, those under his command feel even more ambivalent about the idea of it. In fact, those that seem most convinced make Windu most concerned as convictions on such matters may preclude a slide into what he refers to as the “Dark Side.” As one might expect this “side” is a negative and a label assigned to those Jedi who lose their way and use their abilities for personal gain in some way. For instance, to control others, to protect one’s own family, friends, or desires over the needs of the masses, or to engage in some kind of sadism towards one’s enemies.

We explored these notions in depth, but, repeatedly, this therapist’s own lack of faith and knowledge in the Force presented a gulf between himself and the client. Given this, after discussing the matter in the room, the writer and the client determined he would be better served to work with a Force-familiar therapist.

Subsequently, he has been referred to Doctors Matt Owen and Denys Cowan. The next two appointments are set for August 30 and September 27 and can be found in files STAR WARS- JEDI OF THE REPUBLIC: MACE WINDU #1 and #2.

Given when Mace Windu lived in Star Wars history, Tim Stevens is pre-corruption by the Empire and therefore has not begun to act in what might charitably be referred to as “ethically dubious ways.” Do please try and keep up.