Look back at Carol Danvers' career in Marvel Comics with our latest History of Captain Marvel!

Carol Danvers fought hard for what she believed in during CIVIL WAR II.

Her position put her at odds with teammates, led to the death of her love James Rhodes, and incited horrible injuries for both She-Hulk and Iron Man. But with the world saved, Stark in a coma, and Ulysses on another plane of reality, Captain Marvel needed to figure out how to keep doing her job as the head of Alpha Flight.

That story took center stage in THE MIGHTY CAPTAIN MARVEL which launched from Margaret Stohl and Ramon Rosanas in 2017.

Danvers struggled with sleep after everything that went down in her fight against Iron Man, but soon found even more trouble coming her way in the form of an increased number of alien refugees looking for sanctuary on Earth and the looming threat of a Chitauri invasion.

However, even more immediately, she found her powers raging out of control, causing all kinds of damage in the Alpha Flight Space Station. Eventually, she and the scientists she kept on her team realized that she had been triggered by a genetic anomaly found in certain alien children being rounded up by the shapeshifting thug Mim, working for the evil geneticist Dr. Eve!

Carol put a stop to the current round of her experiments, but Eve planned to cause further trouble. Along the way, Carol befriended a Kree kid named Bean who got turned into star stuff by the end of the adventure. 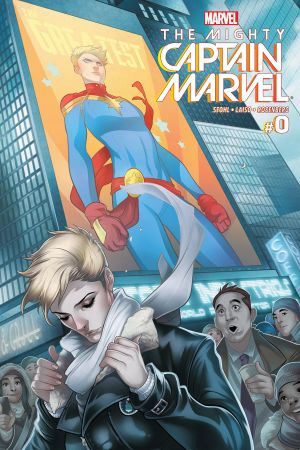 Captain Marvel also found herself forcefully reunited with her former ULTIMATES teammates (the squad was disbanded after in-fighting broke out during CIVIL WAR Ii) when Galactus the Lifebringer called them to become his new Heralds and save Eternity from the mysterious Cosmic Jailer. After that, Carol signed Ms. America, Black Marvel, Spectrum, and Black Panther on as official Alpha Flight members to keep them together.

Everything else got put on hold, though, when an imposter Captain America revealed himself as the secret leader of Hydra during SECRET EMPIRE.

In his efforts to take most of the world's Super Heroes off the board, he arranged for a Darkhold dome to go up around New York City, took over the United States government, and activated the Planetary Defense Shield around the whole Earth. That last move essentially locked Captain Marvel, Alpha Flight, the Guardians of the Galaxy, the Ultimates, and other powerful heroes out of the Earth. And the Chitauri were still on the way thanks to a Chitauri queen's eggs that were hidden on the planet.

While Hydra Cap quickly took over the country and sent dark agents to track down pieces of the shattered Cosmic Cube, Carol struggled to keep the people stuck in space alive. Simultaneously, the Earthbound heroes worked to find the Cube shards themselves to find a way to destroy the shield. Danvers also ordered the Guardians to ask around space for help...which did not go so well. 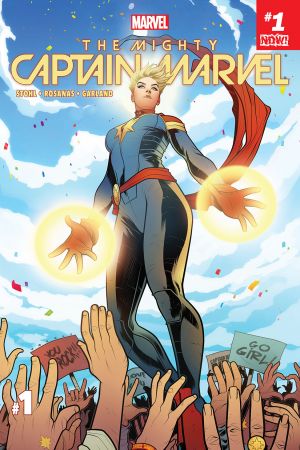 Nor did any of the other plans to stop the Chitauri force altogether. Even when things looked their bleakest, though, Carol told Ms. America and Spectrum that she would follow the mission and stand ready for when the shield did come down.

A ray of hope came when Rocket and Star Lord suggested the use the Alpha Flight Space Station as a delivery system for a Nullifier Bomb. The whole crew watched from escape ships as their attempt at the plan failed, but when the new Quasar woke up after nearly dying in the initial Chitauri attack, she managed to crack the shield. With an opening, Captain Marvel swooped in and destroyed the Chitauri queen eggs, which stopped the alien forces from their attack.

Carol and the other heroes rushed in to help fight Hydra Cap, who ultimately fell to the real deal who came from the reassembled Cosmic Cube. With Alpha Flight destroyed and her friend Black Widow now dead, Captain Marvel struggled to find her place in the world. Instead of rebuilding Alpha Flight, she decided to fly off into space to find Bean. 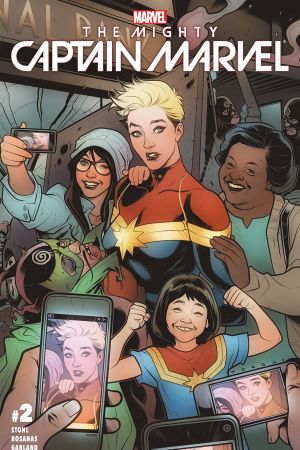 While Carol and the grounded Alpha Flight crew scrambled to find a way to track her down, Mim attacked in an effort to get Carol's blood for Dr. Eve. While chasing Eve and Mim, Carol got caught in a kind of teleportation blast that sent them all to an alternate universe where she ran an outfit of space-based pirates called Zeta Flight!

Captain Marvel struggled to keep her extra-dimensional origins a secret while Eve and Mim tracked down an artifact called the Heart of Gaia. Then they were murdered by Lord Starkill—that dimension's Peter Quill. Starkill later captured Carol and her allies and presented them to Thanos. When Eve returned and got the Heart of Gaia—actually the Reality Stone—she explained her secret Kree origins and how she could restart the Kree homeworld.

In the process, Carol returned to her own dimension along with the Reality Stone...which then got her directly involved with the INFINITY WARS.

Read the latest issue of CAPTAIN MARVEL at your local comic shop now!

'Marvel's Voices': Lorraine Cink on Finding Herself Within the Panels

The host of our favorite Marvel shows talks about discovering her powers when she gave up on fitting in a mold.