The death of Gwen Stacy might almost seem like a curious footnote to readers today. Sure, she’s popped up from time to time in recent years, usually as a clone in an effort to play with Spider-Man’s head, but beyond that, decades’ worth of readers saw Peter Parker with other women. However, Jeph Loeb and Tim Sale captured exactly what Gwen meant to Peter in the pages of SPIDER-MAN: BLUE. The six-issue limited series released in 2002 revolved around Spidey’s alter ego talking to his lost love about their time together through a tape recorder.

In the first issue we saw Spider-Man quietly leave a rose on top of the George Washington Bridge. To the recorder he said, “It’s about remembering someone who was so important to me I was going to spend the rest of my life with her. I didn’t know that meant she would only get to spend the rest of her life with me.” Peter then jumped around, recounting how a battle with The Green Goblin—who knew his secret identity at the time—seemed to leave Norman Osborn with amnesia. Not long after, Harry Osborn asked Parker to room with him.

As Peter and Gwen became friendlier, a shadowy individual began manipulating the villainous likes of Rhino, Vulture, Lizard, and others. That paled in comparison, though, to our hero feeling pulled between two awesome women in his life who both seemed interested in him: Gwen and the newly introduced Mary Jane Watson. Not only does SPIDER-MAN: BLUE capture much of the feel of these original stories from the 70s, but it also distills much of the action for readers who might not be inclined to jump into the ongoing adventures of AMAZING SPIDER-MAN from that time. 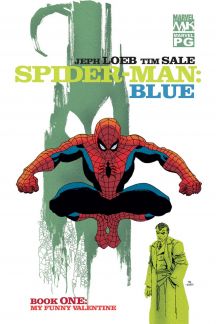 Meanwhile, Loeb and Sale also capture that thrill of youth that comes with breaking out in the world for the first time. Peter’s still in school at this point, but he’s moving away from home and hanging out with people that seem to really like him. Not bad for a kid described as a “professional wallflower” in his first appearance.

Of course, since we all know how that Peter/Gwen story ends, it makes it all the more heartbreaking to see how it began and really started to flourish. Spider-Man would deal with the trauma of losing his first love and learn to put himself out there again, but he’d never forget how Gwen Stacy changed his life.

The real Gwen Stacy returned recently in the pages of THE CLONE CONSPIRACY written by Dan Slott. In the first issue of that series, Spider-Man ran into his former girlfriend while fighting Rhino and Electro at a New U facility. In a back-up story, we flashed back to the day Green Goblin snatched Stacy from Peter’s apartment and took her to that ill-fated bridge. This tale revealed Gwen as conscious during Spider-Man’s confrontation with the masked Osborn. As they fought, she learned the Wall Crawler’s true name and felt betrayed because of his presumed involvement in her father’s death. After her fall, she awoke in a lab run by Ben Reilly in his Jackal disguise and learned that she had been reanimated from her existing DNA complete with memories along with her father. She agreed to work with Reilly in building New U.

Another important woman in Peter Parker’s life takes her turn next time as we look at SPIDER-MAN LOVES MARY JANE.