John Byrne updates the wall-crawler’s earliest adventures for the 90s!

After 30-some years, Spider-Man had racked up hundreds of stories, and getting your hands on those earliest tales didn’t prove the easiest thing in the world. So, to bring new readers into those primal days of the web-slinger, legendary writer-artist John Byrne launched SPIDER-MAN: CHAPTER ONE in 1998.

The series ran for about a year, notching 13 issues total including #0 that dove into the origins of villains like Sandman, Vulture, and The Lizard. In addition to expanding the stories and working in a variety of other details, Byrne also updated styles and included newer technology.

As you can imagine, Byrne tackled Spidey’s origin story in his first issue. In this updated version, the radioactive spider didn’t just bite Peter, but also caused a massive accident that fused Dr. Otto Octavius’ robotic arms to his body. Uncle Ben’s killer also revealed that he thought Spider-Man a fellow criminal who had been casing out the Parker place adding yet another layer of guilt for the young man.

In the second issue, which played with elements from AMAZING SPIDER-MAN #1, Byrne integrated elements from the two stories, which had been separate in the original issue. In this case, Chameleon dressed up as the wall-crawler to withdraw all of the money he’d earned as a celebrity. This also led to his attempt to get a job with the Fantastic Four, but we all know how that ended! 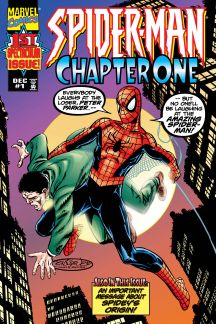 As the series continued, Byrne pitted Spider-Man against villains like Vulture, Electro, Doctor Doom, Doctor Octopus, Lizard, Sandman, Mysterio, Green Goblin, and Kraven as well as more human foes like Flash Thompson and J. Jonah Jameson. Along the way, the new hero teamed up with the Fantastic Four, Hulk, Giant-Man, Wasp, and Daredevil in his original togs. These stories not only capture the spirit of the original tales, but also bring them into a modern era that might make them more palatable for a portion of the audience. Plus, any time you get to see Byrne draw all these amazing characters in their classic costumes, that’s a great thing to experience.

If you’re looking for another modern look at Spider-Man’s earliest days, check out the 2008 five-issue series SPIDER-MAN: WITH GREAT POWER by David Lapham and Tony Harris. Instead of recreating existing adventures, this series takes a closer look at our hero’s time as a media celebrity between getting bitten by the radioactive spider and Uncle Ben’s death. It’s strange to see someone in that familiar costume with such a conceited, self-centered point of view, but it makes his eventual fall all the more impactful.

Next time, Brian Michael Bendis and Mark Bagley create an all-new Web-Head in a brand new universe with ULTIMATE SPIDER-MAN!